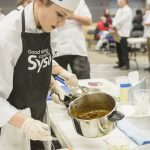 Whidbey Island is a place of abundance. We revel in it. Vistas of water, mountains, and pastures astonish us every day. Actors and musicians greet us over coffee at the corner bistro. Public servants of all ages rub shoulders with us everywhere.

Up north, Oak Harbor High School’s culinary arts program revels in its own abundance of talent, gratitude, and service to the community. Wildcat Catering proudly turns out smiling chefs at events all over North Whidbey. The culinary team has won eight state championships and placed within the top five in the nation four times. The state championship that they won this year gives them a fifth opportunity to be ranked best in the nation at the National ProStart Invitational, in which they compete at the end of the month.