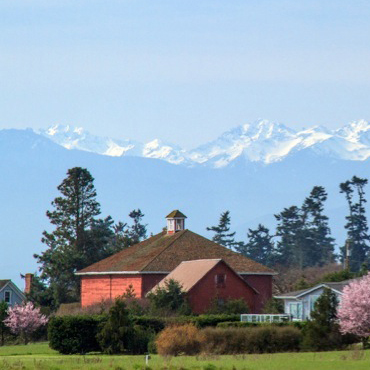 In our Spring/Summer print issue this year, we ran an article on some of the treasured barns on Whidbey Island. We realized, however, that there are so many barns, we needed to save a few to share later. Here is yet another of our island’s well-known barns, photos were taken this last spring…

Snug on prairie land in Coupeville is the Crockett Farm and Barn. Built in 1895, the original 640 acres, owned by Walter Crockett, Sr. and his sons, was one of the oldest farmsteads in the area that later became known as Crockett’s Prairie. (And yes, if you’ve heard the rumor that Walter, Sr. was a cousin to Davy “King of the Wild Frontier!” Crockett, it’s true.)

That area is now known as Ebey’s Landing Historical Reserve. And the barn is listed on the National Register of Historic buildings, as well as the Washington State Historic Barns register.

The Lovejoy Brothers out of Pt. Townsend were hired to build both the Crockett home and the barn; they were originally shipwrights but went on to build many of the Victorian homes in Coupeville. The hip-roofed barn—a style, from back east, with which the Crocketts were familiar—is the only one of its kind in the state

The barn was built like a three-dimensional puzzle—from the ground up, with local stone forming the foundation and each plank fit in with such precision that the diagonally pieced walls are perfect to less than ¼ of an inch. There is amazing workmanship in this 120-year-old structure.

The original building used no iron bolts and the largest nails used were only for the siding and for attaching the wall sheathing to the studs. The barn is an example of classic “mortise and tenon” joint construction: the ends of the beams were “pegged” and corresponding cavities, or holes, were drilled in posts. Then the beam’s pegs were fitted into the cavities in the posts and pinned with wood dowels.

For most of its years the barn was used for horses and cold storage on the main level, with a hayloft upstairs and an outside awning for keeping cows; it was a regular working farm. When asked about the oddest thing that was found on the property as far as farm implements, it was said that there were remnants of a cow-fueled methane gas lighting system in the lower barn.

From coins found in the granary attic (the smaller of the barns) it’s assumed that Asian farm laborers were housed there in the early days.

As with most old structures there are stories of tragedy and triumph—a lot happens over 100-odd years. There were barn dances and political gatherings and, one year, a grass fire; the neighboring Engle family helped save the Crockett home and barn. And then there was the suicide of one of the sons, in the 1890s, in an upstairs bedroom of the home; his (non-threatening) presence is still felt by some today.

The property’s current use is as a private home as well as the Crockett Bed and Breakfast; the grounds are also used for weddings and other events. And while no animals live on the farm at the moment, bees from the surrounding hives are happy flitting around the vegetable and flower gardens that spill over and around the property.

Thanks to Paula Spina and Lance D. Loomis, current owners of the property, for their invaluable information. Book a stay with them (http://www.crockettfarmbnb.com) and they’ll be more than happy to fill you in on…the rest of the story.

Les McCarthy is an author, entrepreneur and IPPY bronze medalist for her yearly, “Healthy Living ~ Healthy Life: 365 Days of Nutrition & Health for the Family” calendars. She is now a full-fledged islander and loves every moment of life on this special rock. She joyfully tends to her geriatric fur factory but is rethinking the cuteness of the local garden-devouring deer and slugs.

David Welton is a retired physician and staff photographer for Whidbey Life magazine. He thinks and processes information visually much to our delight.