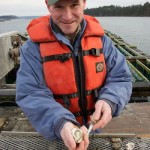 Rain or shine, the 28th annual Penn Cove Musselfest will be held in the heart of Coupeville, this weekend, March 7-9.  Rain or shine, there will be music, food and family fun and, of course, a mussel eating contest, mussel chowder tasting and mussel cooking demonstrations.

Good thing the rugged crew at Penn Cove Shellfish works rain or shine to ensure the mussels will be plenty…and plenty fresh.

As far as food goes, fresher is usually better and there are few edibles that go from source to consumer faster than the legendary black bivalves raised in the waters of Penn Cove by Whidbey Island’s own Penn Cove Shellfish, the oldest and largest commercial mussel farm in North America.

“The mussels harvested today will be on a plate in Seattle tomorrow,” said Penn Cove Shellfish farm manager, Tim Jones.  “We don’t harvest the mussels and store them somewhere.  They stay in the water until we have an order to fill.”

“Food safety is very, very important to us.  Even on cool days like today we take the utmost care to minimize the amount of time the mussels are out of water,” continued Jones, indicating the insulated totes filled with bags of mussels topped with a slurry of crushed ice and seawater.

“And we take care of this water.  Clean water means better mussels,” he said.  “We routinely pick up garbage in and around the cove.  You should see the mountains of trash we collect: tires, bottles, tons of plastic…”

“Blue,” a once injured Great Blue Heron, is further testament to the careful environmental stewardship sanctioned by the Penn Cove Shellfish company and crew.   The big bird was rescued by the mussel men (and women) and shows his gratitude by patrolling the boat to keep an eye on quality standards and dispose of the occasional interloper shrimp pulled up with the lines of mussels.

“Blue flies from raft to raft when he sees the boat,” said Jones.  “Sometimes he walks right on and wanders around where people are working.”

Charlie Rogers has a great view of the mussel rafts from his perch high above the workers on the harvest barge, the “Moule Mariner.”  Penn Cove Shellfish boasts approximately 85,000 lines of mussels dangling down from the 42 rafts floating in the nutrient-rich waters of Penn Cove.  And they employ three crews of 25 people for the tedious and demanding work of harvesting those mussels and readying them for countless dinner tables around the country.

It takes a steady hand and even steadier legs to cut the 20’ long lines of mussels – each of which can weigh up to 50 pounds – and drag them to the harvest barge.

“Penn Cove has the highest natural population of mussels in the Puget Sound,” explained Jones.  “They all spawn at the same time in the spring and the larvae eventually attach to any one of the thousands of collector lines we tie to the rafts.  When they are big enough, we transplant them onto the long lines and thin them to about 150 mussels per foot to avoid overcrowding and allow for uniform growth.”

Shane Moody and Brandon Price tie each mussel-laden line together, one after another, and feed them into a stripping machine.  There, the mussels are swept from the lines where they spent the last 12-14 months eating algae and growing to eating size.

Both the lines and mussel disks used to stabilize the lines and support the weight of the mussels are reused year after year.  This eco-friendly effort greatly reduces the solid waste produced by Penn Cove Shellfish’s mussel growing operations.

After they exit the stripping machine, the mussels get a shave and a haircut to remove their beards (actually byssus threads produced by mussels in order for them to attach to lines, pilings and rocks) and any hitchhiking barnacles.  In this second cleaning stage, the mussels are also separated from errant starfish, broken shells, shrimp for Blue and other debris; they then drop into a hopper manned by Brandon Price before moving next to the conveyer belt for sorting.

Nearly faster than the eye can see, the swift hands of the Penn Cove Shellfish crew give the mussels a final onceover before they move on down the line to be weighed and packed in 2, 5, 10 and 25-pound bags.

After packing, these mussels are shipped off to hungry consumers from New York City to Coupeville, Washington – just in time for Musselfest!

Susan Wenzel, food writer, believes in the power of locally produced food to fortify the health and well-being of both the individual and the community as a whole.

David Welton, photographer, enjoys fine photography and capturing the life of the community around him.