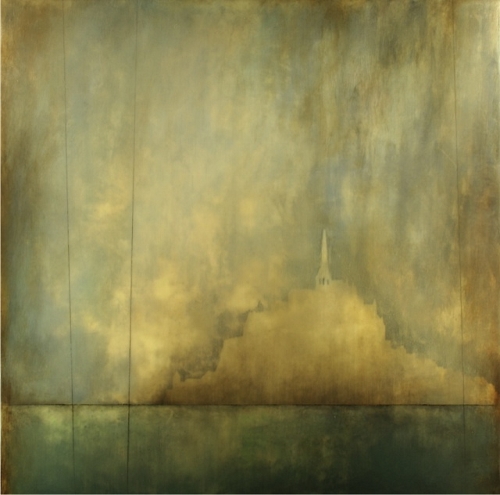 Museo gets medieval at its mid-winter spectacle

Grab your broadsword and sheath, your chain-mail suit, or your Good Queen Maude costume and join the mid-winter spectacle in Langley.

MUSEO will herald in the New Year with an exhibition of works inspired by medieval times, with more than 40 artists showing works that are reminiscent of the Middle Ages.

A special opening night gala is from 5 to 7 p.m. Saturday, Jan. 25, with live music of the period setting the mood by Kimmer Morris and Debbie Zick. The show will run through Monday, Feb. 24.

The term “medieval” derives from the Latin words ‘medium aevum,’ or the “Middle Ages” and refers to that period between the decline of the Roman Empire and that lovely period of rejuvenation, the Renaissance. What emerged from those 1,000 years in Europe, the Middle East and North Africa, translated into what art historians now categorize as Migration, Byzantine, Islamic, Romanesque and Gothic art.

“You Will be Rewarded for Your Efforts,” a mixed-media piece by Melissa Koch. / Photos courtesy of Museo Gallery

It’s easy to see why local artists might like to get into the medieval theme, a period that featured historical figures like Marco Polo, Kublai Khan, Charles the Great, Heloise and Eleanor of Aquitaine. This was a tumultuous period, when elaborate castles were built by powerful kings and queens, when the Crusades began, when chivalrous knights took center stage, the feudal system was introduced, the Magna Carta was signed and the Black Death took countless lives.

Early medieval art was initially restricted to the production of Pietistic painting (religious Christian art) in the form of illuminated manuscripts, stained-glass windows, mosaics and fresco paintings in churches. There were no portrait paintings and colors were generally muted, although there are never restrictions for the Museo artists, who take only inspiration from the theme and do with it what they will.

Famous male artists of the times were beloved by kings and clergy and included Donatello, Giotto, Leon Battista Alberti, Cimabue, Filippo Brunelleschi, Fra Angelico and Lorenzo Ghiberti. There were also famous women artists, predominantly nuns, who were “manuscript illuminators,” the most famous of whom was Hildegard of Bingen, who was also a prolific composer. In other words, the Middle Ages were interesting times, and reveal a huge canon of  interesting art; a good theme with which to provide inspiration.

“The Wizards,” a mixed-media piece by Danielle Bodine.

This is Museo Gallery’s eighth year of its winter extravaganza show, which always features an edgy and imaginative theme, and for which opening night costumes have become a large part of the fun, making the event one of the most anticipated artistic gatherings of the year in Langley.

Don’t miss this spectacle of art — Robin Hood might be there!

Museo is located at 215 First St. in Langley. Here’s the website at www.museo.cc.

Patricia Duff is a freelance writer and editor.