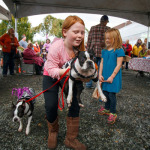 Mutts strut in style at Bayview Corner this weekend

On Saturday, Oct. 25 Whidbey mutts dressed up and competed for prizes at the ninth annual Mutt Strut at Historic Bayview Corner. Judges debated the merits of the costumes and tricks of the dogs and humans complete with embellishment by the entertaining emcee Jim Freeman. This annual event is sponsored by Goosefoot.

There were two #1 Hawks Fans

Larry Johnson embarrassed his daughter Kayla by dressing as a dog. He won a special prize, a gift certificate to Neil’s Clover Patch, and told her he will go in costume. We hope to see more photos of that occasion.

They score a 4 and a 6 from the judges, emcee Jim Freeman says that makes them ten.

A couple of clowns

The Chihuahua has to climb a ladder to get into his baby carriage when clowning duties are over.

Koa the golden retriever and Buddy the pug accompany Gail and Brian of Vino Amore Wine Shop in Freeland.

Jim Freeman and Marian Myszkowski give an award to Leah Hartley during the awards ceremony.

(All photos and commentary by David Welton)

Read more about the Mutt Strut from blogger Les McCarthy.