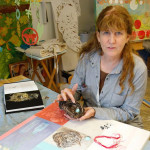 “We move forward by looking back,” remarked multimedia artist Melissa Koch one afternoon when we met in her studio. As she showed me each piece that will appear in her upcoming show at Langley’s Museo Gallery, I began to understand what she meant.

The historical influence of having grown up in Cyprus is instantly visible in Koch’s work. Her silhouette series harkens back to ancient Greek vessel design, but with a playful reinvention. The figures themselves are characters borrowed from Dante and all are framed with mythical texts the artist typed on her grandfather’s typewriter—layers upon layers of stories past, constructed to interpret the elusive present.

Melissa Koch with her palette and objects of inspiration. (photo by David Welton)

I found myself enamored with this triple-entendre of meaning, and rightfully so. As she humbly told me later in the interview, the Seattle Art Museum has taken a few pieces from this series for their collection.

Koch has a refreshing knowledge of history and culture, but even more evident is her devotion to creating from nature. As a newcomer to Whidbey (she moved to Clinton three years ago and splits her time between Whidbey and Seattle), she said the island’s calm, natural decadence has lent its misty gray and earthen beige to her color palette. Her upcoming show is a visual abundance of soft lilacs, vibrant yellow-greens, classic Pacific sunset oranges and the occasional punch of apple red.

During our interview she took the time to show me one of her other projects: painting the sets for Island Shakespeare Festival’s production of The Tempest. Her backdrops are an intricate four-paneled design alluding to important themes of the play, and are equally as vibrant as her paintings.

Her eye for color is vivid. Surrounded by the arts her entire life, Koch received formal training in Brussels, and now mixes her own paints. “The pigments are mixed with casein, which is a natural ingredient,” she explained. Even her technique is rooted in what nature has to offer.

One fundamental motivation of her work, and this show in particular, is to “express the urgent need to be kind to nature” and to remind us of the impact we have on our environment. Not to be confused with heavy-handed “go green” promotions, Koch’s imagery is a delicate and thoughtfully constructed message of environmental appreciation.

Koch showing the bird’s nest used in one of her paintings. (photo by David Welton)

The first piece in her upcoming show features the equine silhouette of Abraxas, the immortal horse of the Sun God, Helios. She has been recently infatuated by horses and their powerful mystique. “I think it [Abraxas] really celebrates the wild nature of Earth.”

Although it won’t be featured in this show, Koch described one of her creations that included an owl: a token borrowed from the island’s natural fauna. As she explained it to me, it was inspired by the sounds of Whidbey to which she’s now grown accustomed. We’ve all heard the ominous owl calls across the darkened prairie, but coming from Seattle urbanity, Koch’s senses were new to this nighttime orchestra.

“The owl is a symbol of Athena [the Greek goddess of wisdom] and also has ties to the nature of Whidbey,” she told me. Koch’s work is a wonderfully revolving door of mythology, nature and our relationship with the environment, bound up inside an incandescent palette and tied off with a streak of whimsy.

Koch’s show will be featured along with artist Kandis Susol at Museo Gallery, 215 First St. in Langley and runs Friday, July 3 through July 26. Her set backdrops can be seen in Island Shakespeare Festival’s The Tempest, running July 17 through September 13. Visit www.islandshakespearfest.org for dates and times.