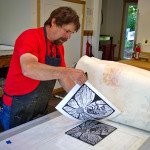 He’s a cowboy racing for all he’s worth across some Southwestern desert on a mighty fast pony. Or now, he’s standing over a jukebox in some lonely saloon, choosing a song as a sultry little thing nearby waits for him to dance with her. They are the only two people in the room. Outside the open saloon door, the vast desert lies flat and empty.

Or now, he’s leaning back in an old chair, its front legs off the ground, his feet on the table, and his mysterious smile—almost a smirk—casts an enigmatic mood into the room. Whatever happens next may be threatening, or simply mischievous, but there will be some kind of risk involved. It’s as if he just told his buddy, “let’s go out and do something, even it’s wrong.”

These three scenarios come from three boldly colorful paintings by Whidbey Island artist Bruce Morrow and they are currently on exhibit at Brackenwood Gallery in Langley. Morrow’s work is also featured in Whidbey Life Magazine’s Virtual Gallery this month along with that of his wife, Buffy Cribbs.

Morrow, with Cribbs, demonstrates the press. (photo by David Welton)

“I do figurative paintings mainly, not much abstract work. My paintings and etchings tell stories,” Morrow said. “At least, there is the beginning of a story there. Something is happening.”

The iconic figure of the American cowboy appears repeatedly in his work. The Glendale, California, native credits his two years spent in the small community of Velarde, New Mexico for instilling in him a fascination for the Southwest, its landscapes and its cultural myths.

“It’s being able to see in the distance, to see that horizon,” he said. “There are no trees in the way. And we have all seen so many Western movies. I latched onto that cowboy image. It’s the American male.”

Those vast, empty spaces with mesas on the horizon under an even more vast, brilliant blue sky have captured the imagination of many American artists. It’s the kind of landscape most of us associate with that lonesome cowboy, independent and self-sufficient, needing nothing to get by, other than his own wit and grit. He has probably contributed more to the ideal of the American male than any founding father, soldier, sailor, politician, farmer, financier or industrialist.

Morrow portrays him often as a shadowy figure, a silhouette, sometimes alone, sometimes dancing with a female partner. At times, we see more of his facial features, but he is almost always sideways or obscure, barely displaying a gritty, weary pluck. In one of his artist statements, Morrow says that his figure represents to him “the ennui of the displaced American male, the maverick, the cowboy without a range.”

Who’s Driving, oil on canvas (photo courtesy of the artist)

Morrow does paint other subjects, often treated with whimsy or humor. An American bison standing in the bed of an old pickup truck. A jazz or blues guitarist. A bird on a wire. A murder (of crows) in a tree. Almost all the paintings feature vibrant, strong colors, often with bold, dynamic textures. Though they are figurative, they are not realist.

“Bruce’s work has been described as enigmatic,” said Morrow’s wife, Buffy Cribbs. “He has an interesting competence. His work feels loose, but he has a way of nailing motion. His work becomes really lively. It’s a kind of beautiful inexactness.”

The two artists met in Peter Voulkos’ studio in the Bay area in 1974. They moved to Whidbey Island in 1986 with their four-year old daughter, Briony. Both had a knack for carpentry as well as experience gained from renovating their first home, so it was natural for them to make a living in construction here. The supportive arts community on the island inspired Morrow to take up his paintbrush again.

They bought a small house on a couple of acres on Sills Road and built a his-and-her studio next to it. Later, they moved the little house across the street and built a spacious, two-story home. Eventually, they acquired another lot just across the road and have transformed the old garage there into their latest artistic venture—Flicker Feather Press. They make art prints by etching on coppers plates, by relief printing from wood or linoleum blocks or by using other transfer methods. Their big Takache press is commercially available for other artists to use.

“I go back and forth between painting and etching,” said Morrow. “I’ll paint a figure and then go see how that would work in an etching, or etch something and then want to paint it.”

Kickin’ Back, etching (photo courtesy of the artist)

Morrow told the story behind one of his paintings. A gallery owner in Seattle, Joyce Bronson, knew how important his New Mexico experience was to him. She arranged for Morrow and Cribbs to visit an art installation, or site-specific sculpture—“The Lightning Field” by Walter De Maria—on the western side of the state near the hamlet of Quemado. It’s a one mile by one kilometer patch of desert where the artist has placed hundreds of stainless steel poles with solid, pointed tips in a grid array.

To get there, Morrow and Cribbs had to wait at the only bar in Quemado for a local rancher called Cowboy Bob. When he showed up, they all drank a few shots of tequila together before clambering into Cowboy Bob’s Bronco and heading out 50 miles over the desert to the site, where he left them at a cabin to spend the night.

“We never got to see lightning strike the poles that night,” said Morrow. “But it did inspire a painting.”

It’s called “Heading to Quemado,” the story of a coyote chasing a hat in the wind.

Martha McCartney’s WLM article about Buffy Cribbs is at the following link: https://www.whidbeylifemagazine.org/the-art-of-buffy-cribbs-painting-backward-thinking-forward/.