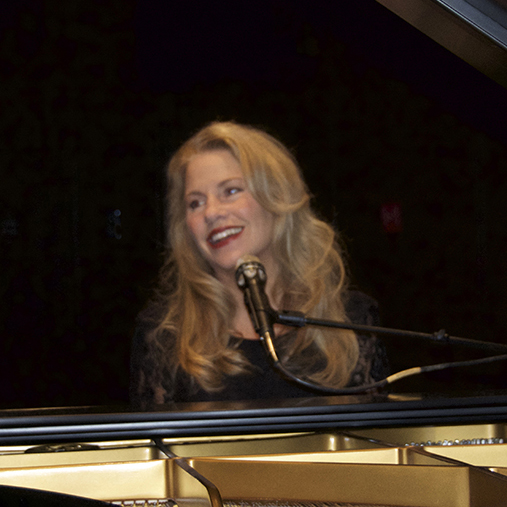 Nancy Nolan: Singing to Reach the Eternity of Now

Once upon a time, a little four-year-old girl had never had a piano lesson. She didn’t know she needed one. Absorbed, as children are, in the elusive and ever present ‘now,’ she would hear a tune on the TV or radio and run to the piano in the kitchen and play it.

The gift of music manifested itself early in Whidbey Island resident Nancy Nolan’s life. Through setbacks and surprises, letdowns and triumphs, music has been her life, her connection with her world and a means of communion with the Divine. The path revealed by this musical light eventually led Nolan to perform at Seattle’s ACT Theatre and Jazz Alley. She sang the national anthem in the Kingdome. She played the Village Gate in New York City and the Gekoin Jazz Club in Japan. She toured extensively throughout the United States, Japan, Canada and Europe and won accolades from such luminaries as Steve Allen, with whom she performed several times and who praised her as a jazz singer.

Off to a performance at the wine bar, Ott & Murphy’s, in Langley (photo by Marsha Morgan)

Yet the idea of Nancy Nolan, jazz singer, is one that she sometimes struggles to accept. She sings jazz, but she also sings show tunes and other types of music and prefers to think of herself as a song stylist or, simply, a singer.

“People in theater think of me a jazz singer,” said Nolan, who earned a degree in drama and performing arts from the University of Washington (UW). She has a tendency to improvise, to break out of the score in musical theater. “Jazz people think of me as a cabaret or show tune singer. I kind of like ‘cabaret singer.’ You have more freedom to improvise.”

She said there was a time that she “would have loved nothing more than to be like Rosemary Clooney, a big band singer. I have the voice for it! I can cut through the horns.” Her fans would doubtless say, “That girl can swing! She’s a jazz singer.” Although her voice is her trademark as a performer, she came late to the realization that she was actually more of a singer than a pianist. In high school, classmates voted her as “Loudest Voice” rather than “Most Popular” or “Most Likely to Succeed.” Her glee club teacher told her, “Nancy, blend in!” and moved her to the back row. Her single voice overwhelmed the entire choir.

In those days, Nolan still didn’t understand the powerful musical instrument she possessed in her voice. Some of her close friends at school urged her to sing in public, and by the age of 17 she was singing folk masses at her church. Her pure, soaring voice filled the spaces in the dome over the altar and the arches above the nave.

Once she reached college, she received further encouragement from her professors. After graduating from the UW, she became a member of Actor’s Equity, the Musicians Union and the American Federation of Television and Radio Artists, and played in nightclubs and cabarets, as well as doing TV jingles and preparing to go on the road.

Nolan lost both parents the year after she graduated from high school. “It’s the pivotal, transformational moment of my whole life and has everything to do with who I am and what I do and the choices I’ve made,” she reflected. Though her parents had provided her with music lessons, opportunities to play and a fine education, they never heard her perform professionally. She claims that she can feel them in the room “when the blarney flows.”

Beautiful, talented, young and hard-working, Nolan applied her considerable discipline to studying the great American singers and composers. The glamorous, romantic moments onstage—often six nights a week—belied the long, arduous hours of preparation, or “woodshedding” in the parlance of the metier. “I did not have much of a social life,” she said. “I lived like a nun. I wasn’t a very fun date. I had to work weekends. I didn’t drink, I didn’t smoke, I didn’t do drugs. Any time off was spent practicing and absorbing as much live music and theater as I could.”

She sought out Seattle voice teacher Maestro George Peckham to learn vocal technique. “I was losing my voice from belting in musicals,” she recalls. “George saved my voice and, as a sort of surrogate father, introduced me to the professional world. Everybody was taking lessons from George. Opera, punk, folk classical; everyone went to George.”

Prior to his death in the early nineties, Peckham asked her to become his master apprentice. For Nolan, this is one of the greatest tributes she has received. His students followed her after his death, and that led to her 25-year long career as a voice teacher—a career she continued after moving to Whidbey in 1998 so her daughter, Maya, could attend the island’s Waldorf school.

A private lesson in Nolan’s studio (photo by Marsha Morgan)

Nolan continues to perform regularly and credits Maya with helping her become a better singer. “Maya made me a better person,” she said. “When my parents died, I put that pain into my music. After Maya was born, I put the richness and beauty of that experience into my music. For the first time in my life, something was more important than me. I became a more balanced person.”

Nolan can thrill and mesmerize an audience because that’s how she felt about the music when she first heard it. “The first time I heard Sarah Vaughan sing ‘Lover Man,’ not the second, the very first virgin listen… There isn’t one time I’ve sung that song that I don’t remember that feeling; the chills, the respect, the divine beauty there. I can tell you exactly where I was and how old I was when I heard each piece for the very first time when the true undiluted essence was laid on the altar of my soul.”

When she opens her mouth and lets loose that remarkable voice, no matter how small or large the venue—Ott & Murphy’s Wine Bar in Langley or the Kingdome in Seattle—she fills the space with intense expression and irrepressible passion. It has always started, however, with Nancy Nolan as tireless, love-struck listener.

What does it feel like to sing with such a voice? The rest of us mortals sing in the shower, in the car, maybe in a choir or some small stage somewhere. We know the joy
and thrill of singing. Nancy Nolan knows that too, but with that voice of hers she must feel something more than the rest of us do, something tied to her commitment to that virgin moment when music seemed to open a gate to something greater beyond.

“After all the study and woodshedding, I get to trip, stumble and fall, gallop and soar in public, breathe in the intention of the next note and trust what comes out of me. When that happens, I know I’m in the pocket of the unspeakable All. When that happens, it is absolute ‘nowness.’ Throw in some Northern Lights and, yes, I believe!”

For more information about Nancy Nolan, her performances or her voice lessons at her Vocal Arts Studio (“Miracles happen in my living room!”) visit www.nancynolan.com.

The singer in performance mode (photo by Marsha Morgan)

Among other occasional performances around the island, including at Ott & Murphy’s Wine Bar, Nolan was selected to appear in one of WICA’s Local Artists Series performances on March 5, 2016.