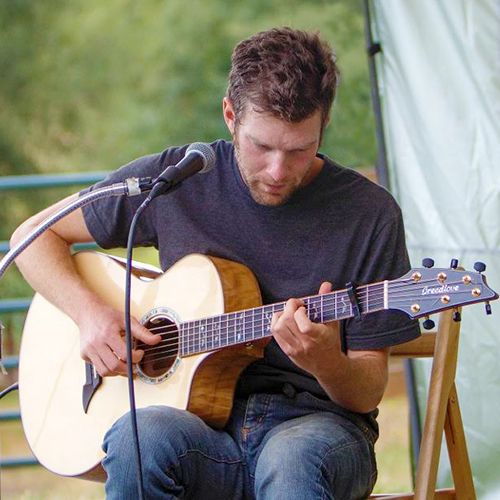 Nathaniel Talbot, with a New Album, Treats Whidbey to a Pre-Release Concert on Thursday, Oct. 22

“He is a man, he’s an able man
Pulled from the the womb with his own two hands
And on the day that lifting a spade is more than he can stand
He’ll carry it down and dig one last hole
At the edge of the wetland.”
— from “Able Man” by Nathaniel Talbot

Nathaniel Talbot lives in a world full of fours. The rhythms of four seasons on his farm, and of four beats to the measure on his guitar, create frameworks that allow him to grow beautiful vegetables in one and beautiful music in the other. He knows agriculture and he knows arpeggios.

And all that may lend a special significance to the release of the Whidbey Island farmer’s fourth album, “Swamp Rose and Honeysuckle Vine.” Though the official release date is Nov. 20, Talbot will treat the Puget Sound area to a series of pre-release shows this month, including one here on Whidbey at 7 p.m. this Thursday, Oct. 22 at the Unitarian Universalist Church just north of Freeland. Other stops this month include Friday Harbor, Ballard, Port Angeles and Bellingham.

“I’ll be playing the entire album at the show as well as a couple of newbies not on the record,” Talbot said. “Accompanying me will be Sam Howard on bass and Steve Tremblay on electric guitar. I’ll also be doing a couple of collaborations with Nick Drummond, the opener, who’s an incredible songwriter and performer. I’m gonna do my darnedest to talk about the songs and the stories behind them.”

Nathaniel Talbot’s fourth album is largely inspired by the land he farms and its setting on Whidbey Island. (photo by Jim Carroll)

The new album has a number of hallmarks that distinguish it from his previous efforts. It’s produced with less instrumentation, sparser vocal harmonies and no drums. It expands upon the storytelling style of songwriting that Talbot began experimenting with in his third album, “Here in the Fields.” It’s also the first time he’s worked with a music label, Fluff and Gravy Records in Portland. They are handling promotion and distribution of the album, which Talbot produced and financed himself.

The recording features some of Portland’s finest as backup musicians. Anna Tivel’s violin playing is exquisitely restrained and she offers up some delicious harmony work as well. (As a side note, Tivel recently was chosen as one of six finalists at the Kerrville Folk Festival’s Grassy Hill New Folk Competition, one of the country’s most prestigious songwriting celebrations.) Add to that Sam Howard on double bass, Lincoln Crockett on mandolin and Benji Nagel on dobro and you have an Americana ensemble from the great Northwest that would make Lewis and Clark feel that the effort to make the trip was well worth it. Talbot was raised on eight acres of property in the foothills of the Cascades just southeast of Portland, began learning piano at the age of seven and switched to guitar when he was 13. He was raised listening to Paul Simon and Eric Clapton and later fell under the spell of some of the artists who were influential in the ebullient Portand music scene; Soundgarden, Elliot Smith and Kelly Joe Phelps, in particular. But Talbot has developed his own style of playing that stands out with its innovative take on traditional progressions and licks, near flawless execution and soulful tone quality.

The songwriting on “Swamp Rose and Honeysuckle Vine” is outstanding, not so much an improvement on what Talbot has done before as it is an acceleration. Talbot’s train has left the station and it’s picking up speed. He has always been more comfortable with theme-based songwriting, but here his farming experience among Whidbey’s rural vistas inspired him to delve into the stories that emanate from the human struggle to wrest sustenance from the ground.

Talbot’s new release features songs that tell stories pulled from the land and the people that work it.   (photo by Jim Carroll)

Building on what he began in his previous album “Here in the Fields,” he gets even more involved in basic storytelling. A man takes pride in how hard and well he works on his farm, but loses his family to city life. Another farmer’s plow can’t cut through the gnarly mesh of a thicket near the edge of his field so he leaves it for another farmer to ponder years later. A lover leaves on a river boat, declaring that he still loves the one he left behind and hopes she’ll be there waiting when he comes back. Is he lying, fooling himself or does he really mean it?

In the song “Paper Town,” Talbot makes about as damning a statement as anyone has made on the ravages of the fracking boom in North Dakota. The song’s refrain pleads “If there’s money in the ground/and no future to be found/then let it lie.” Talbot deftly leads the listener to visualize the lights of the drilling rigs in one county shining “like a field of lucky stars,” and contrasts that scene with the one in the next county over—with “its burned out pumps, poisoned wells and a strip full of lonely bars.” The sordid tale is served up with his signature compositional style; take a traditional melody idea and follow just about every less-traveled turn that presents itself. It’s a kind of jazz thing. What would happen if Bill Monroe jammed with Yusef Lateef?

“[That song is] inspired by my several train trips with Annie back to North Dakota where her family is,” said Talbot. Annie Jesperson is his sweetheart and hard-working partner at Deep Harvest Farm, the organic farm they founded three years ago (as reported in Whidbey Life Magazine’s Fall 2015/Winter 2016 print edition.) “The landscape [in North Dakota] is ravaged and the communities are at the mercy of the industry.”

Talbot’s performance at the Unitarian Universalist Church is liable to be one of those Whidbey Island events that gets woven into the history of the place and remembered, probably imperfectly, by residents years hence. Some grandpa on Mutiny Bay, say, will tell his young guitar-slinging granddaughter about the time this farmer played music at the church. He sang something about swamp roses and honeysuckle vines. And something about an able man.