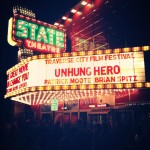 The moment you’ve been planning for weeks has finally come.

The Jumbotron is aimed at you as you drop down on a knee and propose to your girl. But you certainly hadn’t foreseen that she’d say no, and run out of the stadium. Or that the video of that mortifying scene would go viral on YouTube as “UCLA basketball proposal FAIL.” Or that she’d later tell you privately that she didn’t want to marry you because of your undersized… gear.

This was the inspiration for the documentary “Unhung Hero,” which follows actor Patrick Moote, a native South Whidbey son,  as he investigates whether size really does matter. Here’s a funny and poignant look at an illuminating personal journey that is forthright in how it deals with Moote’s “hidden problem.” It’s Moote’s first feature, after carving out a career as an actor in commercials, television and on comedy podcasts.

The film will play at a special Films & Filmmakers event at a 10 p.m. late show Saturday, Nov. 30 at the Clyde Theatre in Langley. A question and answer session with Moote will follow the screening.

Actor and filmmaker Patrick Moote is a graduate of South Whidbey High School. / Photo courtesy of the Clyde Theatre.

Moote and director Brian Spitz traveled the world asking questions and checking out various products guaranteed to enhance an important male body part. He explored this extremely personal aspect of his life by talking to ex-girlfriends, doctors, anthropologists, and even adult film stars. One of his favorite interviews was with a bar girl in Seoul.

“She was hilarious,” Moote said. “She compared seeing a man’s “package” for the first time to opening a present on Christmas. ‘Sometimes you open your present, and you are like OH! And sometime you open it and you are like oh…”

What started as a somewhat light-hearted quest, turned more serious as the two realized that the rarely discussed topic of penis size was actually a subject that sparked everyone’s curiosity. Asked how he could expose his shortcomings in this way, Moote was honest.

“I’ve been working as an actor in LA for a decade now, so my life is all about being vulnerable, and moderately embarrassed. A couple of months into shooting, I realized the issue wasn’t really size,” he said.

“It was about the individual; about embracing your insecurities. To be able to take the whole thing and be public with it, as difficult as it has been, has also been a liberating journey for me.”

Moote was asked how he feels about a Q&A at The Clyde after such a revealing film?

“When the film played at 2013 South x Southwest Film Festival, I plastered posters with myself naked all over town, so I’m beyond embarrassment now,” Moote said.

Patrons of The Clyde will spot some local faces in the film in addition to Moote’s.

“Dr. Bob (Robert Wagner M.D.) is an absolute crowd favorite,” the filmmaker said. “My brother Brian offers some brotherly advice. My mom Joanne Keefe is in it, of course, Aubrey White, son of Bennett and Gretchen, slams me with an embarrassing childhood nickname and gets some big laughs. And I throw a BBQ in Seattle that has a few more familiar faces,” he added.

Tickets are $7 for general admission and $5 for those older than 65. The Clyde does not take credit or debit cards. The film is unrated, but contains “R” subject matter, language and sexual content. Moote will be at Mo’s Pub in Langley before the show because owner Maureen Cook is an ardent fan of the Moote brothers.