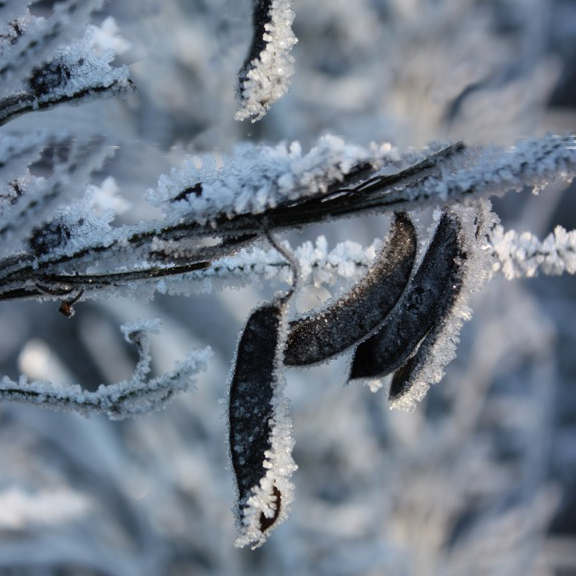 When a high-pressure ridge arrives after one of the soggiest December ever recorded, there are treasures to be found in the woods. It is freezing cold but we walked anyway.

My friend, Susan, and I were strolling through the web of trails behind Whidbey Elementary School when we discovered thick stripes of bright white glowing in the dark forest. We noticed this phenomenon was only on dead wood and never on living branches or trunks.

Susan Zwinger pauses in her walk in the woods to examine an “ice feather.” (photo by Susan Scott)

Picking up these sticks, we found shelf after shelf of microscopically thin layers of ice emerging from the dead wood. These discs were about three inches wide and were perfectly stacked and uniform. Two days later, they had “grown” to almost seven inches in width, and had curled into silky grandmother curls; others drooped down in coils like shiny white beards.

What were these strange creatures? They maintained their shapes as I turned the wood for Susan’s camera, but instantly disappeared when touched by a warm finger. Not melted, but disappeared into thin air, as if they were going from ice to gas instantly.

How plants and animals adapt to cold weather is fascinating and the subject of much study. Some, such as lichen, simply get rid of their water and lie dormant. In the summer you can pour water onto a seemingly “dead” lichen and watch it swell into life. Other plants remove the water from within their cells, (which would be destroyed by freezing) and store it in between the cells. There is a frog in Alaska that completely freezes its entire body—no heart beating—until spring when it thaws and hops off to find a mate.

In this dead wood that we’d discovered—where maximum amounts of water has been absorbed after days of rain—the sudden freeze had swollen the cellular structure and water had been extruded forcefully, either between the cells or from the cells themselves. Thus the beautiful, breathtaking miniature architecture of shelves, curls, columns, and fiberglass-like shapes was created by the cell patterns in the wood itself. It struck us as bizarre that this fiber-ice continued to grow.

Susan had difficulty photographing within the dark alderwood-western red cedar forest, so we turned our flashlights onto the ice structures; they glowed with an otherworldly presence.

Not 15 inches from Susan’s foot, a winter wren discovered a scrape in the leaf litter and was picking out seeds or insects rapidly to preserve its body heat. Perhaps it realized its perfect camouflage; the dark brown bird in dark leaf litter was unafraid of a photographer who was about 450 times his size, looming above.

This small wren, only one-third of an ounce, can maintain a body heat of 97 degrees while, outside, the air is only 27 degrees. What marvelous insulation the thin layer of fluff affords him.

But what of his naked, tiny toes? They are toothpick-thin, yet his heart pumps blood back into them, just as they threaten to freeze. Our regular bird suspects—the robins, chickadees, flickers, and towhees—are tucked up against branches somewhere in this freezing cold.

Even though both of us have wintered in Colorado, hiking and skiing in the cold, bright country, neither of us has ever seen this fiber-ice phenomena before. Only in the Northwest, only near the coast, does this magic of ice feathers happen. Out here, outdoors, the world plays by a different set of the laws of physics.

And to think, just three days ago I was hunched in a big, old armchair feeling sorry for myself, saying, “I never get to see anything new.”

Susan Zwinger, Phd, lives in Langley and wanders South Whidbey Island. She has written four books of natural history, the first of which, “Stalking The Ice Dragon,” won the Governor’s Authors award in 1991. She is an artist and a keeper of detailed nature journals and gives workshops in illustrated journaling. She can be reached at zbird7@whidbey.com.

Susan Scott, photographer and author, enjoys daily walks on Whidbey Island and catching glimpses of extraordinary moments of ordinary life with her camera. Such moments are especially enhanced when walking with good friends, like Susan Zwinger. More of Susan Scott’s photographs can be seen in the gallery at www.susanscottphd.com.