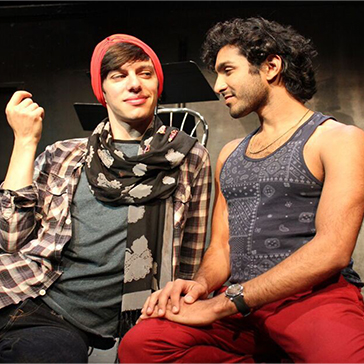 New York, LA and India Converge on South Whidbey on Sept. 17 and 18

An award-winning comedy will get a new musical treatment at Outcast Productions in Langley on Sept. 17 and 18.

The production company, along with a renowned writer and a New York City-based creative team, are out to give South Whidbey something to remember. Langley’s own black box theater company will offer a fully costumed multi-media musical extravaganza with a re-envisioning of Edward Jordan’s love romp—the film “Bollywood and Vine.”

While scripts will be in hand, the production team is pulling out all the stops (including a parrot puppet!) to give its audience the complete musical treatment. Outcast promotes the piece as “Sunset Boulevard meets La Cage aux Folles.” As with “La Cage,” the comedic trappings are an entry into meaningful stories that the creator felt needed to be told. Jordan said it’s a tale about “ageism, self-acceptance and openness to the possibility of love…’cause it can come when you least expect it.”

According to Outcast, the musical revolves around Hollywood scream queen Delilah Leigh, who hasn’t made a movie in years. However, she’s a superstar to love-struck Bhuvan Bannerji, a newly transplanted Indian who runs a bus tour of movie stars’ homes in Los Angeles. A “wannabe filmmaker,” Bannerji hopes to sweep Leigh off her feet and whisk her back to India’s Tinseltown, ‘Bollywood.’

This is the jumping-off point for a yarn full of twists that get at our assumptions about age, race, sex and gender.

As a youngster, Jordan was fascinated by the photos his father brought back from years spent in India. Those memories made their way into his 2004 film comedy, “Bollywood and Vine.” Its take on several “-isms” garnered the 2005 WorldFest Silver Award in the Romance category for Independent Theatrical Films and Videos.

Jordan wished to see where else he could take these characters and story. And when lyricist June Rachelson-Ospa and her musical collaborator, composer Daniel Neiden, got a look at Jordan’s proposed transformation of the film, they quickly found possibilities for the excited author. While happy to work in many genres, Jordan quipped, “I recently had my DNA checked. Turns out I’m 75% musical comedy.”

In revisiting the comedic plot for a musical take, the trio decided to clarify whose story this was. Adoring the bigger-than-life screen actresses of Hollywood’s Golden Age (think Bette Davis and Gloria Swanson), and despising what he saw as a modern dismissal of their work, Jordan found what he needed in Delilah—”a vital, talented, intelligent actress of a certain age, set adrift on an iceberg by Hollywood.” He would put that theme in focus.

After a successful reading in New York, the Long Island native returned to his new Whidbey home, seeking just the right Delilah for his next staging. Inspiration arrived when he saw K. Sandy O’Brien’s turn as Tallulah Bankhead in Outcast’s recent production of “Looped.” Jordan contacted Ned Farley, O’Brien’s Outcast co-founder, who immediately saw a fit.

Though essentially Delilah’s story, “Bollywood and Vine” has something to say about LGBTQ issues, as characters mask their identities in order to find love. And, as evidenced by the title, there is a multi-national flavor to which Farley and Jordan wished to remain true. Yet striving for racial diversity in a small town can require extra effort.

“While we’re pleased that we’ve been able to reflect diversity in some of our work,” Farley said, citing Outcast’s “Ain’t Misbehavin’” as the first all-Black production at a theater on Whidbey, “it’s an on-going challenge for us.” Recently, the company’s “The Flick” featured a character who is Asian-American and the company found its actor on the mainland.

“Creativity and casting from off-island are [again] going to be necessary,” Farley said.

In a hopefully precedent-setting conjunction, some of the New York-based cast from the original read will join local performers for this presentation. While being introduced to actors Levin Valayil, D.J. Bucciarelli, and Jaz Zepatos, audiences will recognize the local talents of O’Brien, Farley, Jennifer Bondelid, Gabe Harschman and long-time favorite, Gail Liston. Liston, perhaps known more for non-musical stage work—her Barbara in “August: Osage County” was necessary viewing—also enjoys the passion of musicals. She relishes, she said, “the way a scene builds in intensity until it’s necessary for the characters to burst into song.”

While the reading is directed by composer Neiden, Music Arranger/Orchestrator Charles Czarnecki (who has conducted on Broadway) will be consulting with Eileen Soskin, another accomplished South Whidbey transplant from New York who has signed on to handle musical direction. A person of most humble charm, she is a masterful pianist who was a professor and associate dean at Baltimore’s vaunted Peabody Institute and now directs and accompanies local talent. “She really helped me,” Liston said, “not only with the music, but to make choices and define my character.”

September’s production further prepares the work for a reading before several Broadway bigwigs. But Jordan is not leaving Whidbey behind. “We’re even discussing a full, full production at Outcast with a longer run,” he said. “Ned Farley has pretty much taken me—and “Bollywood”—under his wing. Then, offering appreciation with the wink of a comedic writer, he added, “I’m in really good wings.”

“Bollywood and Vine” plays at 7:30 p.m. on Saturday, Sept. 17 and 4 p.m. on Sunday, Sept. 18 in Outcast’s Black Box Theater at the Fairgrounds in downtown Langley. See OutcastProductions.net for ticket information and a synopsis of the story.

Image at top: D.J. Bucciarelli (left) and Levin Valayil (right) rehearse a scene from the Actors Equity reading of “Bollywood And Vine” at the Lion Theater, NYC.

David Mayer is an actor, playwright and director who trained in Seattle but found a home in Langley’s welcoming friends and artistry. He works in the tech world, but probably can’t fix your computer.