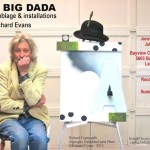 NO BIG DADA at show at Bayview Corner ends July 12

Richard Evans’ NO BIG DADA (Mais un Peu Surrealiste) is showing at The Bayview Cash Store June 7 thru July 12 and includes 33 assemblages and installations on the first and second floors. This show is brought to you by Goosefoot.

80-year old art provocateur Richard Evans is at it again. His new one-man show at the Bayview Cash Store on South Whidbey Island will feature 20 installations—all assembled from found, gifted, and repurposed objects.

Evans’ creative and painstaking method of combining objects is matched by the liberties the artist takes with language, metaphors, and idioms in his titles and descriptions. Evans’ long history as an actor and director in the Hollywood television and film industry and as a writer and director of his own films play a significant role in his artwork. Incorporated in pieces throughout the exhibition are props from his films, old movie stills, film reels, and more remnants from the artist’s creative life.

For NO BIG DADA, Evans has crafted a sophisticated series of homages to artists whose work in a variety of disciplines has endured over the years, including Richard Brautigan, Luis Bunuel, Jean-Luc Godard, Rene Magritte, and Seattle’s Buster Simpson.