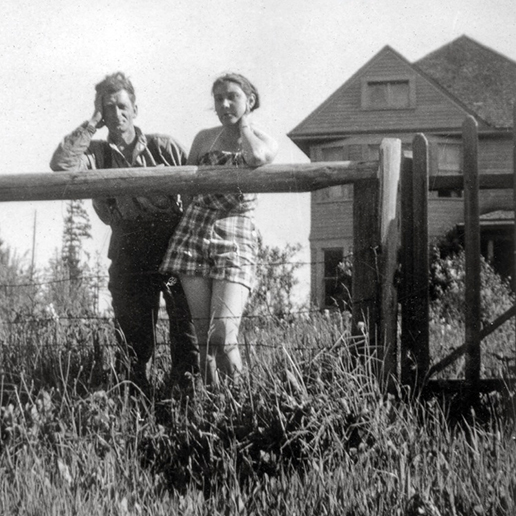 Now, and Then || A Home, Lost, Expands the South Whidbey Fire Department

The cry of a distant siren reminds us of our vulnerability, yet reassures us that aid is near those in distress. But it wasn’t always so.

When South Whidbey’s volunteer Fire Department was founded in 1950, the only fire station was in Langley. On a night in Nov. 1953, events on French Road—ten country miles to the south—catalyzed change.

Mary Sue Kinskie, 13, had just put her two younger brothers, Art and Fred, to bed; her mother Susan was working the night shift at White Acres Nursing Home in Freeland. Mary Sue had just settled herself at the kitchen table with her homework when she and her father, Clarence “Tern,” smelled smoke coming from the dining room.

Mary Sue and her brothers, with their scooters beside the house, a year before the fire. (photo courtesy of the family)

Mary Sue rushed to the hand-crank telephone—a party line that served 14 homes. Fortunately, someone at a prayer meeting at the Little Brown Church, just down the hill from the home, answered at the same time as the operator and heard her call for help. The young woman awakened her brothers and, as they fled the house, she tumbled down the front steps, injuring her knee. Her father, an amputee, tried to dowse the flames with a pail of water, but the one-man, one-legged bucket brigade was no match for the growing inferno.

Mary Sue points, on her dollhouse replica, to where the fire began.   (photo by David Welton)

The men from the church arrived long before the fire truck; there were rumors of an empty gas tank and a flat tire. They were able to save a few belongings, including the stove, a water heater and, from the basement, a box of dynamite—essential to Tern’s lumber business for the removal of stumps. The house, however, burned to the ground. A firebreak kept the flames back from the tree line.

Mary Sue said one thing she recalls was an elderly neighbor lady who, while the house burned, gave her father a tongue-lashing about the dangers of storing dynamite in the basement—all while she sat right on top of the crate.

The teenager and her brothers spent a sleepless night with neighbors and were sent to school the next day, but with a valid excuse for losing their homework.

The Kinskies had no insurance—forecasting dreary holidays for the family—but the next morning a procession of visitors arrived with gifts of food and clothing. A neighbor allowed the family to stay in his empty guesthouse nearby. Timber was felled and hauled to Green’s Mill at Maxwelton Slough to provide lumber to rebuild the house. A work party soon assembled, and within a year the family was home again.

Everyone agreed it was time for the fire department to expand. A temporary one-bay station was quickly erected on Maxwelton Road and a fire truck acquired. A larger two-bay facility, which stands to this day, rose at the intersection of French and Bailey Roads, just below the Kinskie property.

Mary Sue got married and moved away, but later returned and still lives in the rebuilt family home where the rescued water heater serves their needs. Looking back, she said “I still chill to this day when recalling the heat of the fire. But, in the long run,” she added “it was a good thing, as it brought the community together.”

Today, she has memories of family and friends and a 1/12th scale replica of the original house. And South Whidbey has a modern, well-equipped fire department with six strategically located stations, numerous fire trucks and even a fire boat. In real life, adversity can lead to happy endings!

Tern and Susan Kinskie along the fence in front of their home, 1938 (photo courtesy of the family)

“Now, and Then” is an occasional series of historical Whidbey Island photographs paired with contemporary images by David Welton. Read the first story in the series: “Maxwelton 4th of July” here. Contact david@whidbeylifemagazine.org if you have a story to share.