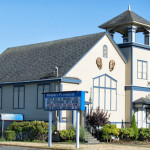 It’s a warm evening in the dog days of summer, but things are jumping and sweat is glistening on enthusiastic bodies inside the 93-year-old Whidbey Playhouse building on Midway Boulevard in Oak Harbor.

Sue and Jim Riney have been involved with the Playhouse for 35 years. (photo by Harry Anderson)

Director Allenda Jenkins is putting a troupe of actors through a vigorous rehearsal for “Godspell,” the 1971 musical that has been performed twice before at the Playhouse (in 1980 and 2004) and will be the opening production of the Oak Harbor community theater’s 50th season that runs September through June.

“Remember to stay in your places and keep your energy way up,” orders Jenkins, a former professional actress and Playhouse veteran who has performed in four productions and directed four others.

The troupe is running through the energetic “All for the Best” song-and-dance number from the now-classic “hippie musical” re-telling of the ministry of Jesus. Wollie Fowkes, a dynamic 14-year-old high school student from Oak Harbor, plays Jesus and, in an interesting bit of casting, his father John Fowkes plays Judas. Wollie’s mother Penny Fowkes is also in the ensemble cast.

Families such as the Fowkes acting together has been a common occurrence at the Playhouse, says Janis Powell, the business manager. “We are truly a theater community.”

Coming soon to the stage:

For more information about Whidbey Playhouse and their upcoming shows, auditions and ticket information, please go to: www.whidbeyplayhouse.com.

Meanwhile, just across the parking lot in the Playhouse’s Star Studio rehearsal space, a casting call is going on for would-be Henry IIs and Eleanors of Aquitaine in “The Lion in Winter,” the second production of the upcoming season and one that has also been done before—41 years ago, in October 1974.

The day-and-night bustle at the Playhouse now is a far cry from its humble beginnings. Indeed, it has survived many ups-and-downs, shifting cultural tastes, actors and audiences that come and go with the Navy, a perpetual shortage of funds and even a devastating fire.  And that makes its 50th season, after 294 productions and more than 2,500 performances, all the more remarkable.

It began on a wintry evening in February 1966, as nine Oak Harbor residents gathered at Kathryn Johnson’s School of Dance on Midway Boulevard to discuss starting a local theater company. Most had been involved in church or school productions, but they dreamed of a community-supported theater of their own. They called themselves the Whidbey Players, and that June they put on two one-act comedies at Kathryn’s dance studio:  “His First Shave” and “Madam President.”  Tickets were free in advance, 25 cents at the door.

That fall they moved to the Oak Harbor High School auditorium for their first full-length play, “Everybody Loves Opal.”  On opening night, a cat on stage in the first act was supposed to die in the second act, but the uncooperative feline continued to howl loudly backstage, eliciting unanticipated laughs.

Over the next several years, the Whidbey Players performed in schools, the basement of a credit union, a movie theater on the nearby Navy base and anywhere else that would have them.  In the late 1960s, they leased an unused church auditorium, converted it to a theater and renamed it—and themselves—the Whidbey Playhouse. Then catastrophe struck:  a suspected arson fire in 1973 destroyed the building and all the props, sets and costumes inside. Back to square one.

But then the “community” really did step in. A group of civic leaders, led by long-time Whidbey News-Times Publisher Wallie Funk, believed in the value of the Playhouse and decided that the old Christian Reformed Church building on Midway Boulevard, empty and for sale, could be a theater. The price was an astronomical (for the time) $249,000, which was even more astounding given the extensive repairs and remodeling needed at the church, built in 1922.

An offer was made in 1979. Frantic fundraising and anxiety ensued, but Funk’s connections and arm-twisting eventually succeeded. The debt was paid off in August 1983, after just four years, thanks to hundreds of private and corporate contributions. Funk’s News-Times trumpeted “The Miracle on Midway” on its front page, and the Playhouse finally had a home.

John Fowkes (left) and Wolly Fowkes, father and son, rehearse as Judas and Jesus in “Godspell.” (photo by Marsha Morgan)

Jim and Sue Riney proudly remember that moment and many others; they have been part of the Playhouse for 35 of its 50 years.  Jim, then a Navy photographer’s mate, was transferred to Oak Harbor in October 1980, and the couple arrived here as newlyweds.  Both had been involved in school or community theaters elsewhere.

“We saw a performance of ‘South Pacific’ a month after we got here,” Sue recalls. “After that, I immediately auditioned for their next production, ‘Finian’s Rainbow,’ and I volunteered Jim to do the lighting.”

The Rineys have now been involved with 82 productions, most recently as director/producers of the Monty Python musical “Spamalot,” a smash hit last fall. Sue served as the Playhouse’s executive director for 25 years until 2009, and Jim continues to serve on the board. Sue will co-produce the upcoming season’s production of “Lost in Yonkers” next April.

They remember the rough days, right after the Playhouse moved into the old church building. The stage—formerly the altar space—was considerably smaller.  (Today, it’s eight feet wider.) There were 220 narrow, un-upholstered seats. “Peoples’ butts were smaller then,” Sue says. (Today, there are 128 wider, padded seats.)  And, most inconveniently, the two restrooms could accommodate just one person at a time. “We had very long intermissions,” Jim says.  (They have since been greatly enlarged.)

The Rineys and others recall the humorous gaffes and near disasters that have become Playhouse legend.

As a Navy town, Oak Harbor has a somewhat transient population, which both helps and hinders the Playhouse.  Talent comes and goes, and so do audiences.  Just last fall, one of the leads in “Spamalot” was transferred by the Navy in the middle of the show’s run.

Oak Harbor also has a reputation for being politically and socially conservative, which has some effect on what the Playhouse does.

“In the 1980s, if we did a play with cursing we’d get letters and cancellations,” Jim Riney says.  “In one drama, the lead actress came on stage in a slip and some people walked out.”

But attitudes and tastes change over time, and Oak Harbor has changed with them. The zany antics in “Spamalot” included dancing orthodox Jews and a gay wedding.  “We didn’t get a single complaint,” Sue Riney says. The Playhouse has not avoided challenging material for amateur performers—from Stephen Sondheim lyrics to Gilbert and Sullivan operettas.  In 2013, it produced its first full-length Shakespeare play, “A Midsummer Night’s Dream.”

But musicals and comedies are what Oak Harbor audiences seem to want most.  Dramas—unless they are well-known, such as “To Kill a Mockingbird”—don’t do as well. Older audiences want stories and music they know. Younger audiences are attracted to things with an edge and technological wizardry.  For a community theater, it’s a delicate balancing act.

The Playhouse is trying to keep up with better lighting, sound and stage effects.  It has an ongoing capital campaign to expand its lobby, green room and offices. It knows it’s competing for audiences with the Internet, malls, multiplexes and smart phones – none of which were around 50 years ago. And it knows it’s competing for donor dollars with several hundred other Whidbey non-profit organizations that didn’t exist in 1966.

For those involved, however, the play’s still the thing. “Godspell” director Allenda Jenkins is thrilled to have the Whidbey Playhouse as an outlet for her creative energies.

“I love what live performance gives me,” she says. “I feel almost like I’m preaching here. It makes a difference. It can change people’s attitudes and lives.”

Harry Anderson spent his 40-year career in journalism and corporate public relations. He worked for the Los Angeles Times, Paramount Pictures and Tenet Healthcare. Today, he gardens and writes for the sheer joy of it for the Whidbey Life Magazine and the Whidbey Examiner.