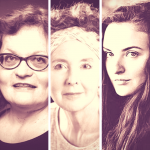 Posted in Theater and Dance

Three women who dreamed of seeing their own plays performed on stage one day will see that dream come true as actors bring their stories to life during the third annual One-Act Fest Northwest at Whidbey Island Center for the Arts, which takes place June 9-24. The work of playwrights Aleah Stacey, Dianna MacLeod, and Teresa McElhinny embrace the festival’s theme, which is “Off-Kilter.”

“We need to stop being so afraid of sex and see more storylines reflecting women’s sexuality in a healthy way,” says Aleah Stacey, who wrote the play “The Oyster” and is directing for the first time. “I believe in romance. It’s interesting when it’s unconventional.”

Unconventional and off-kilter describe “The Oyster,” in which we meet a middle-aged woman dressed to the nines in the late 1950s. She connects with a prostitute as they exchange meaningful eye contact at an upscale brothel.

“There’s a level of comfort in this story with sexual undertones,” Stacey says. “You know when intimacy is real. Touching someone’s arm can be more romantic than sex scenes. I say (to my actors) ‘Stop acting.’ They end up speaking with flow. It’s most important to me that the audience feels the realness of emotion.”

“The Oyster” is a love story between two women. “I wrote the part for an older woman, a 62-year-old actress is playing the part,” says Stacey.” I think that generation is under-represented. Older women are beautiful, and you don’t have to be young to be gorgeous. I often don’t identify with actors my own age, but with older characters.”

Seasoned WICA director Shelley Hartle is mentoring Stacey, who is 20.

As a teen, Stacey found that she liked acting and was impressed by the spirit of collaboration between actors and directors at WICA and at the Island Shakespeare Festival. From her earlier theater experience, she learned how to talk to actors and is channeling that skill into directing with Hartle’s guidance.

“Shelley sometimes steps in to help,” Stacey says. “She’s respecting my coming into my own. This play is a good balance of us working together.  It’s a lesson in self-confidence.”

“When a narcissistic orange cat meets a determined cleaning lady who refuses to sweep dirt under the rug, the claws come out, and the fur flies,” is how Dianna MacLeod describes her one-act play, which she wrote last October.

One of nine “Off-Kilter” plays presented during the one-act festival, MacLeod says her tale is about journalism and President Trump; about the fate of journalism in the current climate.

“The play has humorous moments, as you might expect in a play about a talking cat, but it also has a point,” MacLeod says. “It’s important for artists and writers, no matter their political leanings, to hold a lens up to the moment and try to put that moment in context, to link it to moments that have gone before.”

MacLeod said she was a news junkie prior to the November 2016 presidential election and had to do something with the energy that built up.

“We cannot afford to be cynical,” MacLeod says. “Cynicism leads to apathy. Apathy leads to half our country failing to show up for our most recent presidential election. These non-voters, these non-participants, have led us to this moment as surely as those who were passionate about the outcome. The fewer who participate in selecting our government, the less representative our government will be. Yet, we all have to live with the consequences.”

Enjoy “The Oyster” and “An Interview with Krump’s Cat” on June 13 and 14 at 7:30 p.m. Each show will be followed by an opportunity to ask questions of the writers and directors. You can find more information on the WICA website.

Teresa McElhinny’s “Schools of Thought” ponders our purpose in life and how it evolves over a lifetime.

McElhinny adapted the story from one that was originally written by Jim Freeman for the “Whidbey Weekly.” Freeman is known as a “conductor of fun,” columnist, and emcee of events such as Bayview Corner’s annual Mutt Strut.

“One minute you’re a senior citizen taking a philosophy class at a local community college on South Whidbey,” McElhinny says, describing the play, which she also directs. “The next minute, you find yourself in the afterlife, swimming around in a giant aquarium. Because you are now a fish. And you are told by an angel fish that you have twenty minutes to discover which of seven schools of thought you wish to swim with for all eternity.”

“With this show, I wish to honor the combined wisdom of all the ‘life-experienced’ individuals whose diversity of philosophies and thought process have so enriched my own,” McElhinny says. “I hope this play causes us all to think about why we might choose to behave the way we do.”

Enjoy “Schools of Thought” on June 14 and June 21 at 2 p.m. in Zech Hall. You can find more information on the WICA website.

In the following video, Teresa McElhinny discusses “Schools of Thought” with Jim Freeman.

Kate Poss worked as a library assistant at the Langley Library until last June, when she retired. She worked for three summers as a chef aboard a small Alaskan tour boat from 2008 to 2010. She was a newspaper reporter in Los Angeles for many years before moving to Whidbey Island, where she likes cooking for new and old friends, hiking, reading great fiction, and writing her second novel with her friend Fred Bixby.