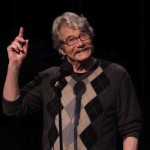 The old dogs are at it again, with some new tricks to perform.

In recognition of April Poetry Month, Rob Schouten Gallery at Greenbank Farm is pleased to present a free evening of poetry titled, “Old Dogs, New Tricks,” featuring poets David Ossman, Stephen Roxborough and John Burgess at 7:30 p.m. Thursday, April 16. Everyone is welcome to come hear these masters of the spoken word read selected poems, while enjoying the artful surroundings of the gallery.

The evening will include Whidbey Island’s own Firesign Theatre star David Ossman reading from his new collection of selected poems, “Marshmallows and Despair,” a collection that reflects the author’s first 15 years of the 21st century. Of it he writes:

As 2014 ends, the daily news that provokes poems of anger or sadness continues with numbing frequency.  For this reason, and because my hope for the future is in our children, I’ve ended this collection with prayers in place of rants.

Ossman began broadcasting poets and poetry in 1960, and in the early 70s brought found poems to Firesign Theatre, who transformed them into improvised performance.  There are audio-poems on each of Firesign’s many comedy albums.

“I’ve always been a political poet and those newsworthy poems have reached the world quickly over the airwaves,” Ossman said.

His journey to this point is nothing if not literary, theatrical and wildly interesting.

Seattle poet Burgess’ newest trick is “by Land,” published this year by Ravenna Press and described as a riff on the “Journals of Lewis and Clark.” The book is a collage of sonnets, concrete poems, handwritten lists, a personal essay in 10 fragments, and drawings (aka graphic poems) inspired by the poet’s own westward journey, visits to historical sites and markers starting in 1978. His previous poetry collections include, “Punk Poems,” “A History of Guns in the Family,” and “Graffito,” all from Ravenna Press.

The award-winning performance poet, Roxborough, may be familiar from his many visits to Whidbey Island during the Burning Word Poetry Festivals of yore. His work includes the collections “making love in the war zone,” “impeach yourself!,” “blurst,” “son of blurst,” “spiritual demons,” “the little book of luminosity,” “this wonderful perpetual beautiful” and “open heart sutra surgery.” Rox is the editor and creative director at NeoPoiesis Press.

Patrons will also be treated to the fine art of the ever whimsical Ossman and Roxborough, with the gallery’s featured show this month, “The Department of Whimzy.”  Here is a collection of  the collages and assemblages of Ossman, which are altogether comical, nostalgic and spicily irreverent. And the photos of Roxborough, the poet who wields his digital camera like an explorer, creating untamed pictures with digital manipulation and an eye for color and design. It’s all cool and quirky and colorful. Come see it through April 27.

Admittance to the poetry reading is free, with a book signing to follow.