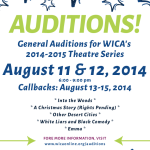 Whidbey Island Center for the Arts will hold auditions open the general public (with an appointment) from 6 to 9 p.m. on Monday, August 11 and Tuesday, August 12  for the five productions in their Theatre Series next season:

• “Into the Woods” by Stephen Sondheim, directed by Robert Prosch – shows in October 2014
• “A Christmas Story” (rights pending) based on the stories of Jean Shepherd – shows in December 2014
• “Other Desert Cities” by Jon Robin Baitz, directed by Andrew Grenier – shows in February 2015
• “White Liars and Black Comedy” by Peter Shaffer, directed by Tristan A.B. Steel – shows in April 2015
• “Emma” adapted from Jane Austen by Michael Bloom, directed by Matthew Gregory – shows in June 2015

Participants are asked to prepare two contrasting (for example: classical and modern, or dramatic and comedic) monologues.

For more information or to reserve a five-minute audition slot, interested parties should call the WICA Admin Office at 360-221-8262 or email Production Director, Deana Duncan, at deanaduncan@yahoo.com.

Callback auditions will be held from , 6 to 9 p.m. on Wednesday, August 13 through Friday, August 15.

Whidbey Island Center for the Arts is a registered 501(c)3 non-profit organization serving the community of South Whidbey Island and beyond. Founded in 1996 by Island Arts Council, WICA’s mission is to inspire, nourish and enhance the artistic, social and economic well-being of the community.