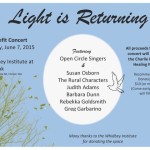 The Open Circle Community Choir, directed by Peggy Taylor, will join with several prominent musicians in a concert called “Light is Returning,” at 7 p.m. on Sunday, June 7 at the Whidbey Institute. Members of the choir are honoring and helping Charlie Murphy who was recently diagnosed with ALS (Amyotrophic Lateral Sclerosis), also known as Lou Gehrig’s Disease. Joining the choir will be Susan Osborn, The Rural Characters, Judith Adams, Barbara Dunn, Rebekka Goldsmith and Greg Garbarino.

Charlie is a Seattle musician who was the leader of the band, “Rumors of the Big Wave” in the 1980s and 90s. He has become known in recent years for directing an international youth program called Partners for Youth Empowerment (PYE Global), www.pyeglogal.org, an outgrowth of Power of Hope, www.powerofhope.org, which he co-founded with Peggy Taylor. Charlie and Peggy co-authored the popular book Catch the Fire: An Art-Full Guide to Unleashing the Creative Power of Youth, Adults and Communities.

Eric Mulholland, Charlie’s husband, comments: “Since getting the news of this diagnosis, we have been deeply touched by the outpouring of affection and feel uplifted by the love and support from our South Whidbey community.”

Proceeds from the concert will be used for Charlie’s medical bills, treatment and related expenses.

Admission to the concert will be by donation to the “Charlie Murphy Healing Fund.” Donations to the Fund can also be made at any branch of Whidbey Island Bank/Heritage Bank; by check sent directly to Charlie and Eric’s home at 4885 Blue Lady Lane, Langley, WA 98260; or online at http://www.youcaring.com/charlie-murphy-361893.