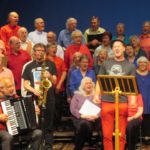 How Can I Keep from Singing? Peggy Taylor and the Open Circle Singers

On a dark blustery Monday evening last week, while many of us sat snug in our homes listening to the litany of nightly news, a group of men and women gathered at a potluck dinner in the Fellowship Hall of the Langley Methodist Church, celebrating the concert they performed in the night before and the music that brings them together.

Members of the Open Circle Singers chatted and laughed. The atmosphere felt inclusive and welcome. Indeed, all singers are welcome.

“There are two kinds of choirs,” says Peggy Taylor, who created the Open Circle Singers more than a dozen years ago. “One is more traditional and can be pretty challenging; the other is formed for the joy of singing and doesn’t need an audition. We’re not as ambitious as other choirs may be. We learn some songs from written music, but others we learn by ear. We spend some time at each rehearsal singing short four-part songs over and over so we get to bathe in the beauty of the harmony. It’s like taking a sound sauna!”

Taylor says her inspiration for creating the embracing group of about 80 or so, who sing for the joy and connectiveness it brings, began with Shivon Robinsong, a friend who leads a choir in Victoria, British Columbia. Robinsong and Taylor, along with 15 others, cofounded the Hollyhock Retreat Center on Cortes Island in British Columbia, where music is but one of many retreats one can attend to expand the mind, body, and soul.

“Shivon calls her group the ‘Gettin’ Higher Choir,’ says Taylor, laughing. “She claims we all need a big dose of vitamin H—harmony—in our lives. What better way to get that than through singing?”

That 300-voice choir is described as “come as you are,” where even the shyest of voices can rediscover the joy of singing.

Many of the Gettin’ Higher Choir’s concerts benefit the Power of Hope, a nonprofit that Taylor and the late Charlie Murphy founded in 1996 with the belief that all young people can be tapped for their creativity, leadership, and contribution to bring about positive social change. Its model has grown to include camps in California, Canada, Uganda, and India.

The Open Circle Singers was formed on a similar and inclusive notion that singing promotes well-being and a sense of belonging. Taylor says “Too many people are told as children to ‘just mouth the words’ because their singing isn’t perfect. Sadly, they never sing again.” She aims to remedy that by welcoming all.

The Open Circle Singers performing at the Whidbey Island Center for the Arts last May. (Photo courtesy of Peggy Taylor)

“What connected my mother with me as a young child was her harmony singing,” Taylor recalls. “I learned it in my bones. I was sad to discover later how many adults haven’t had this joy. It’s a vibrational experience. For people who’ve turned off their singing voice, reconnecting with the voice they lost track of is so enjoyable.”

Indeed, Petra Martin, managing editor of Whidbey Life Magazine online,  sings tenor in the Open Circle Singers and feels the good vibration. Performing at the Dec. 11 holiday concert at the Whidbey Institute, the choir sang seasonal songs and an homage to the late Leonard Cohen — his “Hallelujah.”

“There were times I couldn’t sing because I was near tears, especially when the entire audience joined in.” Martin says. “The music was so beautiful.”

Soprano Gail Ptacek used to sing in a quartet, but when that group broke up, she didn’t sing for five years and missed the experience.

“This has brought my voice back,” she said. “It’s a heart-warming gift. Peggy has a true sparkle in her eye when she directs us. She chooses wonderful selections.”

After the potluck was over, alto Nicole Luce tapped her glass to catch everyone’s attention. She toasted Taylor for her enthusiasm and can-do attitude.

“I view you as an amazing weaver,” said alto Pam Engler. “You bring out the best in us.”

The crowd stood spontaneously in applause, which inspired Taylor to invite everyone to sing.

“When the choir sings, I feel like I’m walking on air,” Taylor says. “The sound heals me—and all of us—from the inside out.”

Another view of the Open Circle Singers performing at the Whidbey Island Center for the Arts last May. (Photo courtesy of Peggy Taylor)

“I loved it,” the man said, his eyes alight. “It’s beautiful. It draws me in. I knew I needed Jesus and I walked in. God was calling me, and I knew…”

Taylor says one of the social missions of the choir is to bring music to the community by singing when asked to. The choir has performed at Hearts and Hammers events, the Clyde Theater, farmers markets, and various community benefit concerts. Proceeds from the recent concert at the Whidbey Institute benefitted the South Whidbey Homeless Coalition.

The final song after the potluck was a revisit of Leonard Cohen’s “Hallelujah.” I was invited to sing along and, like Martin, found my voice choked with tears at the emotion I felt at that moment. There is something powerful about singing in a welcoming atmosphere such as this.

All are invited to join the Open Circle Singers, who resume practice on Monday, Jan. 9, in the Little Theater at South Whidbey High School on Maxwelton Road from 7 to 9 p.m. For more information, contact Peggy Taylor at peggy@whidbey.com.