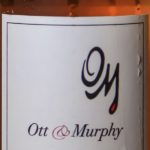 Showcasing both visiting musicians and local favorites, the Ott & Murphy Winery Tasting Room   is a central part of the music scene in Langley. And, not surprisingly, the cabaret-style venue is a popular place to enjoy a glass of wine while soaking up the view of Saratoga Passage.

The artisan-scale winery produces approximately 1500 cases of wine a year at their bucolic Swede Hill setting on southern Whidbey Island. Following my GPS instructions, I meandered along the curvy roads on my way to chat with Ott & Murphy (OM) winemaker Chris Hunter. A driveway marked by a simple wine barrel confirmed that I had arrived at the winery.

Hunter met me on the porch of the main house where he was finishing up morning coffee with winery co-founder David Ott. We headed out across a yard brimming with herbs and blooming flowers—gardens tended by Ott and his wife Diane (a familiar face at the tasting room), who settled here almost 30 years ago.

We wound our way through the lab and warehouse, then into cool, dark barrel rooms so well-insulated they need virtually no heating or cooling. We found a sunny spot to sit and chat on the back patio next to the tower of harvest bins. A fixture at any winery, the large white containers were sitting empty, waiting patiently until the August through October harvest season; then, as Hunter and Ott do annually, they’ll make several pilgrimages to pick up ripe wine grapes from across the Columbia Valley.

The winery maintains a focus on traditional French Rhône Valley style wines. The grapes used in OM wines are selected from vineyards in the Red Mountain, Rattle Snake Hills and Yakima Valley AVAs, including the highly respected Boushey Vineyard and Elephant Mountain Vineyard.

L’Entente is the winery’s flagship red blend. The blending percentages vary slightly from year to year, but it remains a more than 75% Syrah-based blend. Hunter uses Mourvèdre and Petit Sirah   to add body and dimension. “It’s essentially a Syrah, but the Mourvèdre and the Petit Sirah add some nice rich elements and some body, so it’s a little heavier than just a Syrah.”

Hunter is enthusiastic about the upcoming release of two single-varietal bottlings that are more commonly found in blends—Mourvèdre and Counoise. “I think there’s a place in the market to do some new things.”

Mourvèdre is still somewhat uncommon throughout the Washington wine country. During the barrel tasting of the 2014 vintage, Hunter said, “the taste was so fantastic we decided to bottle the two barrels we had as a single varietal—a 25-case run.” He noted that the characteristics of the wine make it intriguing for those with fine tastes, adding that it has “a smokiness that isn’t over the top.”

Unlike Mourvèdre, Counoise acreage is expanding throughout Washington. OM’s 2014 Counoise had more tannin than normal, and that’s one of the reasons why Hunter decided to do the single-varietal bottling. “It’s really rich for being such a light-bodied wine,” he said, referring to this release.

In fact, the Counoise is representative of the style and focus of Ott & Murphy’s offerings of reds. “We want to offer light-bodied Washington wines that are rich and flavorful,” the winemaker said. “The Counoise is an example of this; it lines up with the tastes of someone who might be looking for something more subtle.” Hunter considers it a wine that might be appreciated by a fan of Pinot Noir.

The winery strives for “more of a natural style,” Hunter noted. “Other than keeping the wines stable, we do not try and dictate flavor. We use small amounts of oak, but we like the fruit to show its characteristics, and we allow long fermentation times.” The winemakers use only native fermentation on their white wine, which means that no yeast is added during the fermentation period.

Just in time for the long warm, sunny days, Ott & Murphy has released their 2015 Chanson Rosé. The wine is a delicate salmony color with hues of yellow and orange. Hunter is fascinated with the color of Rosé. “This time of year, when I see a sunset, all I see is Rosé. I find the colors exotic and romantic.” He also added that it is David Ott’s favorite of the OM line up.

The colors of a sunset, OM’s 2015 Chanson Rosé (photo courtesy of Chris Korrow)

OM’s focus and quality of wine-making extends into the Otts’ and Hunter’s commitment to offer a place for locals and tourists to come in, relax and enjoy some music and a glass of wine in downtown Langley. Hunter emphasized that it’s important to OM, as a business, to be of good value to the local community, “That is probably the number one goal—to be a part of our community and know we are making a positive contribution to Langley and to the south end of the island.”

OM is currently offering six reds, four whites and their Rosé. To learn more about OM’s wine club, schedule of events and wedding wine packages, stop into their tasting room on First Street in downtown Langley, visit their website at http://www.ottmurphy.com or follow them on Facebook.

Christy Korrow lives in Langley and is employed full-time in publishing. She and her husband Chris are co-developers of the Upper Langley Cohousing Community, a 16-household neighborhood on 10 acres in the city limits of Langley. www.christykorrow.wordpress.com.