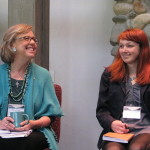 Right in the middle of April—earth and ocean month—the Whidbey Institute hosted a two-day conference on global climate change that attracted activists, artists, students, business leaders and educators from throughout the Cascadia bioregion.

While the gathering included the dedicated gray-haired activists one would expect at an environmental conversation convened on South Whidbey, most of the participants were under forty. Since the event was billed as an “intergenerational dialogue,” conference organizers went out of their way to ensure a diversity of ages. Students and representatives from nonprofit organizations were well represented, thanks in part to vigorous fundraising efforts and the generosity of the Institute.

State of the Movement

KC Golden, senior policy director at Climate Solutions in Seattle (named Seattle Magazine’s #1 “Eco-Hero”), gave the keynote speech after flying the red-eye back from “Harvard Heat Week.” Golden’s observations were fresh from the front lines, where students had demanded their influential university divest from fossil fuels and take a leadership position for climate justice.

“The students are so clear and bold,” said a clearly moved Golden. “Administrators were scurrying around being vague, but the students did not budge from their conviction that the university must take principled action.”

Golden also reported on activities in Port Angeles and Seattle protesting the arrival of a Shell Oil Arctic drilling rig for repairs and refurbishment. “Climate denial has reached its fullest expression when we burn enough fossil fuels to melt the ice cap, and then view this as an opportunity to go drill because the ice is gone.” Golden referred participants to the sHELLNO.org website for the latest news on planned actions.

During an afternoon workshop, citizen activists from Bellingham described efforts to limit coal trains in their city. A young mother/writer/filmmaker, Julie Trimingham, recalled her reaction when she learned that as many as 18 coal trains/day—each 1.5 miles long—could invade her city, scattering coal dust all the way. “Not near my six-year-old son, you won’t!” Although Trimingham had never been an activist, she felt she had skills that could influence hearts and minds; she went on to organize a website (www.coaltrainfacts.org) and prepare educational posters to be displayed all over the city. “Our purpose has been to provide the best information possible regarding West Coast coal export,” she said. “In particular, the proposed Gateway Pacific Terminal at Cherry Point.” The movement has united citizens from all walks of life, including members of the Lummi Nation.  The Department of Ecology’s environmental impact statement is eagerly awaited.

Mother and daughter presenters, Elizabeth May and Cate May Burton (photo by Ann Linnea)

The real heart of the intergenerational dialogue about climate change was evident in a Saturday morning conversation between Elizabeth May and her daughter Cate May Burton. Elizabeth May currently serves as leader of the Green Party of Canada and is a member of Parliament representing Saanich—Gulf Islands. Cate May Burton is a graduate student in feminist studies in Nova Scotia.

A lifelong, tireless advocate for the environment, Elizabeth May was named by Newsweek as one of the world’s 100 most influential women. Executive Director of the Sierra Club of Canada from 1989 to 2006, she has now turned her attention to the complex task of being an elected official.

“I am disciplined in my thinking and do not give way to despair,” she said. “Two things were significant in 2014.  It was the first year that the accumulation of global greenhouse gases did not go up in a year where there was not an economic downturn. It was also the first year when the amount of investment in renewable energy surpassed the investment in fossil fuels. I believe it is important to speak about the complex, sometimes discouraging subject of global climate change in a way that does not polarize people or elicit guilt.”

Daughter Cate, raised by an activist mom and also inspired by an activist grandmother, said, “There was no point in my life that I did not know climate change was significant. I have had a first hand look at a lot of amazing strategies.”  Inheriting such a legacy has caused Cate to identify the links between environmental and social justice. “My generation brings an understanding that everything is connected. Climate activism may open the door for correcting many social injustices.”

In the face of dire predictions of rising seas, severe weather changes, melting ice caps, and the creation of millions of climate refugees, Elizabeth often hears the comment, “Of course, you don’t tell your daughter the worst things.”

“I think it is important to tell our children the truth without terrifying them,” she responded. “And I think it is valuable to raise our children so they know that the things that need changing can be changed.” Elizabeth is preparing to attend the 2015 United Nations Climate Change Conference in Paris, France, where a legally binding and universal agreement on climate from all the nations of the world will be sought.

Plant for the Planet presenters (photo by Ann Linnea))

A stunning sequel to the mother-daughter conversation was presented by ten young “Plant for the Planet” activists, aged 8-14. They are part of a worldwide movement started by a 9-year-old German boy, Felix Finkbeiner, committed to raising awareness about climate change and global justice—and to planting trees.  (http://www.cnn.com/2011/LIVING/02/23/teenage.tree.ambassador)

As slides played across the wall, each of the children spoke in turn, stating their name and proclaiming, “I am a climate justice ambassador.”  Marguerita Litvachuk , a nine-year-old from Oak Harbor, explained how droughts affect animals and people. Her mother, Veronica, said her two daughters have been highly motivated since the first “Plant for The Planet” academy was held in March on Whidbey Island. “They made a presentation to the Oak Harbor City Council on April 7,” she said.  [To learn more, visit www.climatechangeforfamilies.com].

Among the many efforts to “think globally, act locally” are plans by Whidbey residents Phil Jones and Derek Hoshiko to stage a bicycle “pilgrimage” to the open-pit tar sands near Ft. McMurray in Alberta, Canada.  Jones and Hoshiko, both long-distance bicyclists, have enlisted participants throughout the region.  “It will be about a 1,000 mile journey, about the same as from here to San Francisco,” said Jones. “We want to go and see for ourselves what is happening there, how different groups of people feel about it and connect it more directly to our lives here.”  To learn more about the trip, planned for August, visit www.tarsandsride.org.

Fortunately for us all.

To find out more about local activities and celebrations during earth and ocean month, visit www.whidbeyearthday.org.

Ann Linnea has been writing about environmental issues for decades beginning with her 1991 award-winning book, “Teaching Kids to Love the Earth.” Most recently her full color “Keepers of the Trees—A Guide to Re-Greening North America” was published by Skyhorse Publishing in New York.