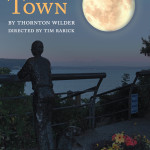 Whidbey Island Center for the Arts (WICA) presents Thornton Wilder’s “Our Town” as the theatrical finale to its 2013-14 season. Opening on Friday, June 6, the play will run three weekends through June 21 on WICA’s Michael Nutt Mainstage.

This timeless, three-act drama explores daily life at the turn of the 20th century in Grover’s Corners, New Hampshire and, in particular, the blossoming relationship between two young neighbors, George Gibbs and Emily Webb.

Wilder’s Pulitzer prize-winning play portrays the circle of life—growing up, adulthood and death—and the spare set and lack of props challenges the audience to see universal truths and the meaning of life pared down to its essence.

Whidbey Island Center for the Arts is a registered 501(c)3 non-profit organization serving the community of South Whidbey Island and beyond. Founded in 1996 by Island Arts Council, WICA’s mission is to inspire, nourish, and enhance the artistic, social, and economic well-being of the community.