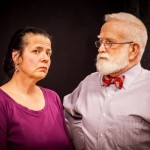 Let’s face the facts: The cycle of poverty in America is shamefully bolstered by corporate managers, who value the market more than the average worker’s well-being.

Peggy Gilmer, Judith Dankanics, Mona Newbauer and Julia Tewksbury portray the low-wage women workers of “Nickel and Dimed” on (not) getting by in America.  (photo by Jim Carroll of Shu Images)

Joan Holden’s play “Nickel and Dimed” is based on the sociological non-fiction, bestseller “Nickel and Dimed: On (Not) Getting by in America” by Barbara Ehrenreich, about the author’s undercover odyssey into the world of a low-wage life. OutCast Productions opens the play at 7:30 p.m. Friday, March 6 at the Black Box Theater at the Whidbey Island Fairgrounds in Langley. The show runs through Saturday, March 21.

Can a middle-aged, middle-class woman survive when she suddenly has to make beds all day in a hotel and live on $7 an hour? Maybe. But one $7-an-hour job won’t pay the rent. She’ll have to do back-to-back shifts, as a chambermaid and a waitress. Ehrenreich’s book about her discoveries in the hardscrabble life of underpaid women in America is vivid and witty, yet always deeply sobering, and Holden’s script brings that sobering reality to life.

Julia Tewksbury as Barbara and Eric Anderson as Phillip rehearse Joan Holden’s play “Nickel and Dimed,” based on the nonfiction bestseller by Barbara Ehrenreich. (photo by Jim Carroll of Shu Images)

Director K. Sandy O’Brien maintains a comic lightness throughout, as the middle-aged Barbara stumbles around the country from one hard-knock job to another. Meanwhile, what is finally illuminated is the ultimate conclusion of Ehrenreich’s study: There is a dark shadow of oppression that continues to weigh heavily on the low-wage workforce of America.

Tickets are $18 for adults and $14 for student/seniors.

Tickets are available via Brown Paper Tickets here. You can also reserve tickets and pay at the door by cash or check by emailing us at ocp@whidbey.com.

The Black Box Theater is located at  819 Camano Ave. in Langley. Find out more at www.outcastproductions.net.