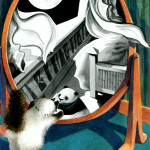 ‘Pandamorphosis’ Gets a ‘Kickstart’ into the World

“As a little kid, my brothers and I had stuffed pandas and we played with them all the time,” said Anne Belov, the artist responsible for a “wordless children’s picture story book” about magical wishes gone awry—with pandas.

If you’ve been following Anne on Kickstarter, the crowd-funding website, or you’re a regular visitor to her website, you’ll know that “Pandamorphosis” is the next step in her journey with pandas. She describes this project as “A Fable of Magic Wishes, Cats and Pandas” and it’s Anne’s latest artistic adventure.

In an understatement, Anne said, “It’s visually engaging.” The story is about a little girl who loves pandas, a cat who is jealous…and lots of magic that ensues.

“Pandamorphophis” is also Anne’s third experience using the Kickstarter site to obtain funding for an art project. In this newest effort, Anne has created over 45 colored pencil drawings that are being professionally scanned by Fine Balance Imaging at Bayview Corner on Whidbey. Some of the images will also be made into posters. The Kickstarter money will go toward the cost of scanning and fulfilling the rewards from her backers.

Anne had her first introduction to Kickstarter two years ago when she posted a project, “Inspiration from the Source,” to obtain $5,000 for a trip to Italy to study a special style of egg tempera painting. The campaign was a success, but it came down to the wire; she got the final support she needed to obtain the funding in the final two hours. In addition to getting the backing needed to make the trip, she said, “I learned what to do to make a Kickstarter campaign a success.” Now, she coaches others about clarifying goals and not making assumptions about who will support your ideas. She also has many other tips for obtaining the necessary backers by the selected deadline (a Kickstarter campaign can run up to two months, but the successful ones tend to have much shorter timelines.)

For more than 35 years, people have known Anne for her brilliant, realistic oil paintings that make great use of color and depth. Still, despite her success as a painter, one of Anne’s great childhood loves remained: her love of pandas.

In 2007, she read an article in Atlantic Monthly about a bunch of toddler pandas in China; she was inspired to begin looking at pandas online and friends sent her articles to read. Within a year she’d created her first panda cartoons. “I’d draw the eyes and ears—and a story would begin to happen.” She added, “Now, I create the storyline first.”

Her friends saw her drawings and suggested she illustrate some children’s books. Less than a year after her first Kickstarter success, she launched another campaign for $6,700 to help fund “Your Brain on Pandas.” This, too, was a success and, with the help of Kickstarter, Anne has built “The Panda Community,” comprised of fans and supporters who love the panda cartoons and were excited to help publish her books. There are now three books in “The Panda Chronicles” series and a fourth is about to be released.

Despite her experience in creating a successful Kickstarter campaign, Anne was still delighted to discover that “Pandamorphosis” had accomplished its original fund-raising goal of $4,200 in just a day and a half after its launch.  And, delighted that she reached her first goal, she’s announced her “Stretch Goal.”

“When I started doing the illustrations for “Pandamorphosis,” I always thought that one day it would be wonderful to do an exhibition of the original 45 drawings from the book,” the artist said. “So I talked to the owners of my local gallery, The Rob Schouten Gallery, here on Whidbey, about hosting the show, and they said, “heck yeah!” However, an exhibition requires framing for all pieces—an expensive proposition—so Anne’s new goal is $10,000.

The campaign is still going strong and continues through February 28. If you want to become a backer of “Pandamorphosis,” there are still some great rewards available, including a copy of the book, signed by the author, for a pledge of $33 and fine art reproductions from the book for a pledge of $46. You can even become an official backer for just a $1 pledge.

To participate in this Kickstarter campaign and to see several of the illustrations that will be in the book, visit the website: https://www.kickstarter.com/projects/arttraveler/pandamorphosis-a-fable-of-magic-wishes-cats-and-pa

You can also see samples of Anne’s paintings, as well as her panda drawings, at her website: http://nothingoverlooked.wordpress.com

(Pictured at top, cover illustration for Pandamorphosis by Anne Belov)