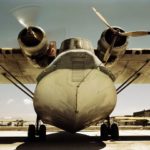 The PBY: A Flying Boat That Made Its Home on Whidbey Island

The 1940 census indicated an Oak Harbor population of 376, or many fewer than the island town’s cows, sheep, and chickens. But, change was a-coming, as they used to say around the barbershop and the grammar school. In a matter of weeks, work crews would be on the job starting on two planned navy bases valued at $25 million.

As far as most on the island and the rest of the country were figuring, war on two foreign shores meant that then-neutral America would find itself neck-deep in war by the end of 1941. By the beginning of that year, the two navy bases were blossoming around Oak Harbor — one in Crescent Harbor downtown, the other west of town in Clover Valley, five miles away.

The war, and increasing numbers of arriving military personnel, certainly changed the populated areas of the little farm towns dotting the island. Many more opportunities were available off the farm, and many young people both from on the island and off, were setting a new tone for once sleepy Whidbey Island.

For any generation growing up during or after the war years, the pace of life in Puget Sound islands was noisier due to planes and increased ground traffic. Eagles and herons were competing for space in the air, and there was a swimming, flying “bird” vying for the attention of island residents that was to become the star attraction of a local air museum.

Yes, it was a plane, but a special one that was appealing enough for even a grown man to call “cute,” and to enthrall several generations to form genuine fondness and affection for the seaplane called the Albatross — the PBY that made history around the world, wherever there was water to take the place of tarmac. PBY stands for “Patrol Bomber Consolidated Aircraft,” which was part of a 1922 aircraft designation system. It was built to do certain waterborne jobs and do them well.

A PBY at the Naval Air Base in Corpus Christi, Texas, August 1942 (Library of Congress Prints and Photographs Division Washington, D.C.)

The planes were made from 1936-45 and remained in service as a firefighting plane into the 21st century. They weren’t speedy (but fast enough to get the job done), not high-flying (but there was nothing it wanted up there, anyway), not climate-controlled (aw, just zip up yer jacket, you’ll be fine).

Those stationed at the Whidbey Seaplane Base were busy serving both Puget Sound, where they flew patrols throughout, and in the Pacific — from the Aleutians to the South Pacific — providing replacements and much-needed parts.

And, as the planes flew, their young captains honed their aviation skills and invented many maneuvers that enhanced what their planes were able to accomplish. For example, the pilots’ skill at finding openings in cloud cover helped the allies secretly discover the location of the Japanese fleet heading for Midway. Sharp radio operators rapidly sent word of the fleet’s location to sailors and ships on the water.

Earlier, before the United States had officially entered the war or began supplying allies with weapons of war, there was an American ensign surreptitiously assigned to help British pilots fly the American plane. And, on one flight, the crew he led located the legendary German warship, the Bismarck. His action won him the Distinguished Flying Cross. But it remained a top secret for several years before pilot Lt. (JG) William A. Chase could explain why he receive the honor.

In 1998, a group of PBY aficionados established the PBY Memorial Foundation in Oak Harbor to preserve and study all PBY “Catalina” aircraft and the aviation history of NAS Whidbey Island. The foundation now offers a 4,700-square-foot museum that includes artifacts, flight simulators, and a genuine PBY Catalina displayed across the street with a couple of ‘40s vintage cars.

The museum’s collection of naval aviation historical artifacts is housed in four separate spaces. Vintage uniforms are hung in the research library and adorn mannequins in the museum. (Photo by David Welton)

Your tour opens in the gift shop, and it also ends there, but go in that way if only to glance at the beautifully restored wood-and-Bakelite Wurlitzer jukebox, with chrome-cased 78 rpm WW II-era records. It’s worth a look.

To your right and down the hall, the exhibit begins long before the planes arrived, with photos of Native American residents, pioneer families, and early scenes of the airfield and seaplane base.

“This would be like a maintenance area in the South Pacific,” says George Love, the museum’s head of restoration, and a Vietnam-era vet, standing in one of the display rooms in the museum. “It would have had sand on the floors, but what you see on the shelves is pretty much what you’d find in one of those shops.”

Visitors can enter the nose-mounted “eye” turret to aim the machine guns. (Photo by David Welton)

It is a remarkable display of the sort of maintenance facilities designed and built by those who worked in them. Love points out a few of the products and tools in the mock shop. He then motions to follow him into a room where he stops at a black-and-white photograph of a group of ‘60s-era sailors who appear pleased about something.

“Guess which one I am,” he says, pointing to a figure in the picture. “I’m here, and here’s my brother and his best friend.”

One side-step later and Love is in front of a rack of vintage uniforms worn since the outbreak of World War II. The older ones look like what your father or grandfather might have worn during WW II — the newer ones like what sailors wore during the Vietnam era.

“And, there were women, too,” he adds, pointing at a mannequin wearing a woman’s navy uniform from the 40s. “I dunno, it seems like they were a lot smaller then.”

He was right. The men seem shorter, too, or at least their uniforms do.

Plans now call for the museum to grow, so it can include all the planes that were ever stationed on Whidbey Island, says Wil Shellenberger, president of the PBY Memorial Foundation.

“It’s time,” he says, “there have been a huge number of planes at the bases.”