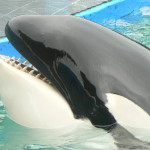 Over 100 orcas were herded into Penn Cove 45 years ago . The young ones were netted and hauled onto trucks for theme parks worldwide. All but one had died by 1987 but, incredibly, she is still alive. They call her Lolita. August, 2015, marks the 45th anniversary of Lolita’s capture from her family, the Southern Resident orcas, in Penn Cove off Whidbey Island, WA.

In memory of the nearly 40 Southern Resident orcas captured in Washington State, and the 13 orcas killed during the captures, and in honor of Lolita—or Tokitae, the sole survivor—Orca Network is sponsoring several events to commemorate the 45th anniversary of the 1970 Penn Cove Orca Capture on Saturday, Aug. 8.

From 11 a.m. until 4 p.m. a free event is planned at the Coupeville Rec Hall and includes educational displays, videos, Tokitae Tattoos and kids activities. Books, DVD’s, whale- and Lolita-related merchandise from the Langley Whale Center will also be available for purchase. A Waterside Salmon Ceremony with Samish elders Rosie Cayou and Bill Bailey will be held from the Coupeville Wharf at 3 p.m., to honor all the orcas captured in Penn Cove.

From 4 to 8 p.m. we will meet at the Coupeville Rec Hall for food, drink, displays and a silent auction. We will hear from John Hargrove, author of the New York Times Best Seller “Beneath the Surface,” Seattle author David Neiwert, (“Of Orcas and Men”) and Freeland author Sandra Pollard, (“Puget Sound Whales for Sale,”) who will read from their books and be available for book signings.

Howard Garrett of Orca Network will give an update on efforts to bring Lolita home to her family in Washington State, including news of Lolita’s recently being listed as part of the endangered Southern Resident Orcas. Special musical guests are the Derik Nelson Band, featuring their lovely Lolita Song and the video which was filmed near Penn Cove. Vern Olsen from the Shifty Sailors will perform his “Lolita Come Home” song and Jim Marcotte will perform his song called “Better Days,” honoring Lolita. Admission is $25 for the evening event; wine will be available for purchase.