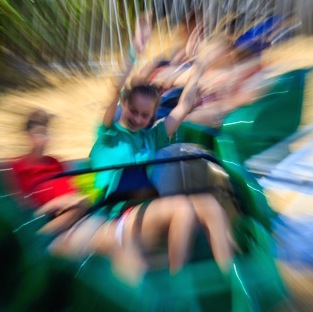 Pigs, Cotton Candy and Rides—Oh My!

It’s a sure sign that summer is in full swing when the Whidbey Island Fair comes to town. If your last weekend was filled with cotton candy, petting farm animals, equestrians, art, music, rides and four days packed full of fun, you might be in some of these photos. If you missed it this year, you’ll want to get your calendar out for next year, because nothing beats a small town fair!

Claire Lawson coaches her hen on the teeter-totter at the Chicken Olympics. (photo by David Welton)

The roller coaster is a scream. (photo by David Welton)

A young girl proudly negotiates the perils of the big slide. (photo by David Welton)

Genghis Carroll walks his dog Baxter between the Ferris Wheel and the elephant ear concession. (photo by David Welton)

If you are handed a speeding ticket in Langley, you might get a closer view of this henna tattoo! (photo by Emily Alexander)

Danny Vernon, voted in the Top Ten in the World as an Elvis impersonator by Elvis Presley Enterprises, gave an amazing show opening night. (photo by Emily Alexander)

The One Man Band blasts off in the fair parade. (photo by Emily Alexander)

Deano the Clown manages to get kids into trash bins—and they seemed to actually enjoy it. (photo by Emily Alexander)

Many compete in the jump rope contest, but none jumped higher than this kid. (photo by Emily Alexander)

Matt Hoar poses for the camera on the Clucky Stage before the chicken show. (photo by Emily Alexander)