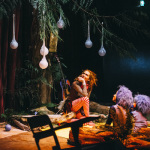 Piper Reva Steps into the Light

The heart and soul behind WINOT?! Productions and “The Wizards of Weepy Isle,” Reva defies easy categorization: singer, songwriter, playwright, costume designer, actress, performance artist, creative powerhouse. She does it all, and does it well. But more than that, she inspires.

“You’re her!” a customer in the coffee house said to Reva as this reporter sat down to interview her recently. “I saw your show last year, it was amazing!”

A few minutes later, another enthusiastic fan approached.   “I loved, loved, loved your show!” the beaming customer said. “I would see it again in a heartbeat!”

Lucky for him and the rest of us, we will get a chance to see the new incarnation of “The Wizards of Weepy Isle, Revival” this weekend, Feb. 13-15 at the Black Box Theater on the Island County Fairgrounds in Langley.

So, what is “Wizards” exactly?

“The main character is Penelope Zazen, a gypsy performance artist whose soul gets lost at sea in a shipwreck,” Reva explained. “She lands on the shores of Weepy Isle, reincarnated as a meek little creature of innocence named Fuzzy Leopard Mouse. Fuzzy Leopard Mouse is visited by six wizards, all quite outlandish characters of Love and Truth, who guide her to reclaim the strength and wisdom lost in the storms of her past.

“Oh, and it’s all true,” Reva stated. “Everything in the play is true.”

Reva used to perform solo to illuminate a past full of tragedy and hardship in powerful spoken word and song performances that oftentimes left the audience and Reva herself in tears. She went looking to heal herself by traveling the world, performing her art and learning. But when she landed on Whidbey Island five years ago, she found her home. And her happiness.

As is so often the case here, Whidbey provided a safe and welcoming community that allowed Reva to walk out of the darkness and into the light.

“I do happiness now,” she said. “Although there will always be an element of the dark.”

“Wizards” came into being when Reva applied for a scholarship from Whidbey Island Center for the Arts (WICA). She proposed a performance piece that would encompass her own journey from darkness to light, using her life as the springboard for a magical, mystical tale of death and rebirth and self discovery. It was big. Bigger than just Reva on stage. She needed more people: kids and poets and musicians and artists and friends.

Wizards opened in October 2014 at WICA to rave reviews.

“It was an amazing experience,” Reva said. “I had people stop me on the street to tell me that the play had changed their life. One woman, who was 75 years old, told me that she was so inspired by Wizards that she decided to finally take voice lessons and learn to sing.”

There’s a lot going on.

“I want to make people laugh,” Reva said. “I’m finally able to use comedy to heal tragedy, to laugh at the pain and the humanity of the experience. Once you get people into the giggle box, it allows them to be in a childlike state that can sow the seeds of change.”

Like embracing a long-abandoned dream? Or taking singing lessons?

“Yes! It is so awesome to see people inspired by the play,” Reva said. “I want to take it on the road. Share it with the world!”

But first, she’s sharing it with Whidbey. Lucky us.

(Times corrected 2/12) The Wizards of Weepy Isle, Revival runs Valentine’s weekend only, Feb. 13-15, at the Black Box Theater on the Island County Fairgrounds. Shows start at 7 p.m. on Friday and Saturday, 2 p.m. on Sunday (doors open at 6:15 Friday and Saturday and 1:15 on Sunday). On Saturday an art show by the cast is noon to 5 p.m. Tickets are available at www.wowi.brownpapertickets.com or at the door: $20 adults, $11 kids under 15. More information can be found on Facebook or by visiting piperrevamusic.com.

Penny Webb is a writer, singer, songwriter, mom and gardener. She is currently hatching a bunch of ideas.