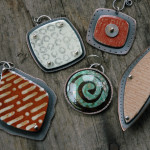 Tammi Sloan — Portrait of the artist as a flower

Here is a silver, lollipop ﬂower represented by four marks and a circle. Here’s a copper wren conjured with simple carving and etched marks. And here is a ladle-shaped piece of hammered copper holding a freshwater pearl suspended from a zigzagging silver wire to represent a seed as it begins its destined, living transformation.

These are just a few of countless creations sprung from the eye, heart  and hand of Tammi Sloan, one of this month’s featured artists in WLM’s Virtual Gallery. Each one is elegant and often simple in design, sophisticated and reﬁned in spirit, and expertly handcrafted.

Sloan’s Wren House Pendant is made of copper, silver and garnets. / All photos courtesy of My Brown Wren

To all appearances, they are the work of a seasoned, master artist with perhaps several decades of experience informing the creation of each new piece. Yet Sloan only began making jewelry as a serious endeavor about four years ago.

Still, her life had prepared her for a life in art since the time she herself was merely a seed. Born into a family whose women were constantly creating with their hands, her genes carried the stamp of the artist, and it didn’t take long before she began creating things herself.

“I remember that as a kid, I was making stuff all the time. We made our own Christmas decorations, pot holders; all kinds of things,” Sloan said.

Her great aunt and grandmother, both painted. They both had jobs that required them to use their artistic talents. One did silk-screen designs and the other made stuffed animals. Her great aunt’s husband, Sloan’s Uncle Bud, inspired her to see birds as they ﬂitted around the feeders and baths outside his windows. She would draw them for hours as they talked about all the different birds they’d see.

Sloan’s journey towards the mastery of an art form did not follow a straight line. Her interest in drawing continued throughout childhood and, as a high school student, she aspired to become an interior designer. She carried that passion on to college, where she enrolled in a drawing class. There, however, the ﬁrst major twist in the road confronted her.

“I was working on a portfolio for the class, when I received news that Uncle Bud was very sick with a brain tumor. I didn’t go home, though, because I needed to ﬁnish my portfolio,” Sloan said.

Her uncle died and his death affected her deeply. Sloan quit drawing.

But, the family stamp was indelible, and Sloan would eventually find her way back to an artistic life.

The following years were ﬁlled with other lessons in life and art, which would contribute to her rapid evolution as an accomplished jeweler, once she ﬁnally embarked on that path. Around 1985, she took a class in Tempe, Ariz. with master enamelist Mary Chuduck, where she learned soldering and cloisonné. That was another seed planted, but life swept her further along, seemingly on a different path.

Sloan’s Inspirational Quote Pendants are made of copper, silver and colorful assorted stones.

After marrying Steve Sloan, she was soon busy managing their household and raising their two daughters, Shannon and Lauren. Still, that genetically imprinted urge to create soon had her working with her daughters to create polymer clay beads and other creations. She also sewed and knit clothes for her family, using her reﬁned sense of design, and honing her manual skills to create the practical material things of everyday life.

She also sometimes had to work to help support the family, especially after the family ﬁrst moved to Whidbey Island and her husband was having difﬁculty ﬁnding work. Some of the jobs she held offered her the opportunity to develop skills that would later prove useful in her art. Working for an optical company, for example, she learned a great deal about how to match colors for tinted lenses, and how to create a bezel along the edge of lenses so they could ﬁt in their frames.

Through all those years, Sloan was also in pursuit of spiritual meaning and fulﬁllment. She studied Reiki and is now a level two Reiki master. Here on Whidbey, she has also taken classes in several disciplines, including sound healing and energy healing. Her spiritual lessons and knowledge serve her art, too. She has described creating jewelry as “a moving meditation,” and “an exercise in mindfulness … that brings me to a place of deep peace.”

In 2009, Sloan began making beaded jewelry. However, she was obliged to buy many of the components of her pieces and felt that their overall originality suffered as a result.

“When you buy mountings and ﬁndings in shops or online, your work just looks like everybody else’s,” she said. “I wanted to learn how to make all the components for my pieces so they can be truly my creations.”

In 2010, Sloan met Riki Schumacher at the Anacortes Art Festival. Schumacher was creating jewelry using a process that incorporates metal clays (a by-product of automobile manufacturing). A metal clay can be copper or silver held together by an organic binder. When ﬁred with extreme heat in a kiln, the binder burns away, leaving only the metal. The process gives the artist more ﬂexibility in creating designs.

After taking her ﬁrst class in metal clays while on vacation in New Hampshire, she wasn’t sure that she liked the method. But with further study and experience, she soon became adept and has found many ways to incorporate it with other processes to create her pieces for her “My Brown Wren” line of jewlery. For example, she has learned how to etch metal in a salt bath using electricity. The process is called electrolytic etching and uses no harmful chemicals or acid.

Enameled Jewel necklaces are made with fine silver and enamel on 18 inch sterling silver chains.

Sloan has taken many classes along the way, choosing processes and teachers to suit the needs of her rapidly growing awareness of possibilities, fueled by her highly creative imagination. Hammering sheet metal, using a jewelers saw, etching, making components; if she didn’t know how to do it, she sought out people who could teach her.

In so doing, she has become a teacher herself and offers classes in electrolytic etching, metal clay and enameling, and in making handcrafted ﬁndings, as well as other processes.

Sloan is currently exhibiting and selling her work her on the island at the Rob Schouten Gallery in Greenbank and Inspired Arts Gallery and Gifts in Freeland. You might also see My Brown Wren at summer arts and crafts fairs, such as Choochokam in Langley and online at www.mybrownwren.com, and through Etsy.

From the seed’s potential to the bloom of fulﬁllment, Tammi Sloan has allowed herself to be transformed into what she was destined to be. From inside a window between two realities somewhere, her Uncle Bud must recognize the beautiful little brown wren he loved so much a long time ago.

Visit the Virtual Gallery for November to see a slideshow of Sloan’s work.