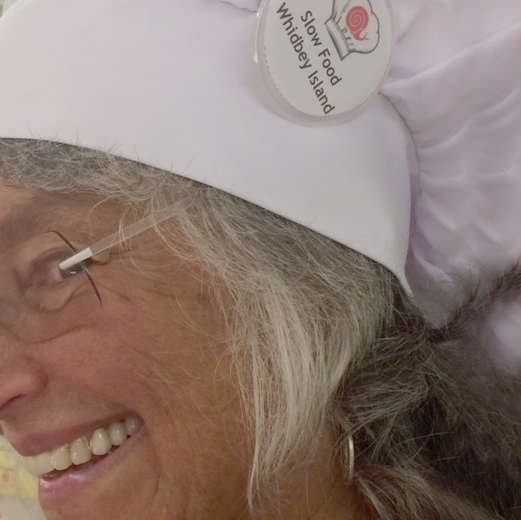 Is your reaction the same as mine? Tentative, if not downright skeptical?

Who would waste good butter and sugar and flour making a cobbler crust only to sprinkle it on the humble, bland, and frequently oversized zucchini?

And, by the way, she didn’t waste a bit of butter. The zucchini in her cobbler tasted like essence of apple, pear, vanilla, lemon and something unidentifiable but delicious. In the spirit of investigative journalism, I ate one, two, three pieces trying to detect just what. And I grilled Kathy relentlessly: hadn’t she snuck in an apple? Hadn’t a pear made its way from orchard to cutting board? Hadn’t something more exotic, more difficult to detect, migrated in? A quince? A handful of gooseberries? Hadn’t something been mashed beyond recognition and stirred into the so-called zucchini?

She swore (as much as Kathy swears, which I’m guessing isn’t much) that her cobbler contained zucchini and only zucchini. She has a very honest face.

Still, the zucchini is a troublesome vegetable from almost any perspective. Does it contain a double “c,” a double “n” or both? To get around the tricky spelling, and to enhance its appeal, the Brits call the cucumber-shaped-squash-with-smooth-skin a courgette.

Courgette Cobbler. Yep, I’m liking the sound of that. And there’s no denying I liked the taste.

The Courgette Cobbler wasn’t the only interesting dish on the menu. The “Root-to-Stalk” prize was awarded to Jim Hicken for a jelly made from the bits of pears and apples he removed before drying the rest of the fruit. This core-and-peel concoction glowed a lovely deep pink color and was nicely and naturally firm (the pectins come prepackaged in the peels).

But it was local writer Vicki Robin (“Blessing the Hands that Feed Us” is her most recent book) who walked away with the big prize, a heaping basket of vegetables, in recognition of her…zucchini relish. (Yes, the Z; it’s last in the alphabet but first on the ingredient list, at least at this time of year.) I’m told that recipes from the potluck can be found on the organization’s Facebook page.

Among the wonders and pleasures of dinnertime with the Slow Food folks was a chance to meet and hear from some of the young farmers working our island’s acres. (They also acted as judges, handing out chef’s hats to winners.) Present were six of the up-and-comers, some apprenticing at the Rosehip Farm in Coupeville, others at Greenbank Farm’s Organic Farm School.

I enjoyed (one could say “relished”) hearing them—average age, 25—singing the praises of kale. (At 25, I’d never tasted kale; that pleasure arrived sometime in my fifties.) And don’t get these farmers started on kohlrabi! (Peel, slice into medallions, dip in hummus! Or, for kohlrabi chips, slice thinly and bake!)

As the Slow Foodie Farmers shared their discoveries, their recipes, their enthusiasm, I noticed the older folks in the room smiling in a particular way; I think of it as the nostalgia smile, the smile of people who grew up on farms, whose parents had gardens, who learned to use what was on hand and find a way to preserve the excess for leaner times.

Indeed, who wouldn’t admire the fervor and the sheer physical stamina that propelled these young farmers to attend a potluck after a day of bending and picking, plucking and hauling? Who wouldn’t admire Amber’s tattoo; her arm from shoulder to elbow covered with a tomato plant twined with a pea vine? It’s her unique, clever and utterly endearing way of wearing her heart on her sleeve.

So, thanks to Slow Food Whidbey for featuring the next generation of farmers…and for showing me that zucchini can be a sweet treat, kohlrabi can be a thin chip and my upper arm can be a garden.

Image at the beginning of the article: Dianna in her summer hat (photo by Martha McCartney)