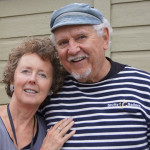 Postcards from Whidbey Island || A Tale of a Whale

She was born under the cloudy skies of the Pacific Northwest, but she’s lived most of her life beneath a blistering Florida sun. As a youngster, she roamed 100 miles a day in the Salish Sea; for the last 40 years, she’s inhabited a watery cage a mere one-and-a-half times her size.

An intelligent and curious creature that thrives on stimulation, she’s encircled by barren concrete walls. Originally part of a close-knit family, she lives in isolation. Once wild, she now performs tricks twice a day for tourists. Among 45 of her kind caught between 1965 and 1973, she’s the last survivor.

This orca whale has two names: Lolita is one. Tokitae—Chinook for “nice day, pretty colors”—is the other.

To mark (or mourn) the 45th anniversary of the capture of members of the Southern Resident pod of whales in Penn Cove on Aug. 8, 1970, the Orca Network held a day of education and activities.At a waterside ceremony on the Coupeville wharf, representatives from the Samish Nation offered up a cedar plank, cedar boughs, kelp and a salmon—along with a prayer for Tokitae’s return to her home waters, where her pod still swims and her mother, thought to be 87 years old, still calls for her. Vern Olsen of the Shifty Sailors performed his song, “Come Home, Lolita.” Musician Jim Marcotte sang “Better Days,” a hopeful look toward the future.

There was even whale ale for sale. Nearly everyone in attendance wore a message tee-shirt featuring an orca.

Authors Sandra Pollard (“Puget Sound Whales for Sale”), David Neiwert (“Of Orcas and Men”), and John Hargrove (“Beneath the Surface”) described the remarkable nature of this species, the evolutionary advantage of empathy, and our ethical obligations as humans. Hargrove, a former whale handler for SeaWorld, revealed the cruel practices of the marine circus industry: “Pure exploitation and greed disguised as education and conservation,” he said.

The Derik Nelson family—siblings Dalten, Riana, Derik—performed their song “Lolita.” If heartfelt words and ethereal music could magically bring about the release of Tokitae, these surely would. But there’s no doubt they contribute to a growing movement for her release; the Orca Network hopes the next event will be a welcome home party.

Leaving the Hall at the close of a day of ancient prayers and insider insights, tales of whales in song and story, I was stopped in my tracks by a rainbow stretching the length of Penn Cove. Although that rainbow might be only a mixture of light and mist, prism and refraction, I chose to see it as a sign that Lolita/Tokitae might one day swim beneath its mysterious, marvelous banner.

To learn more about the orcas of Penn Cove, visit www.orcanetwork.org and any of the authors’ websites. To learn more about the Shifty Sailors, visit www.shiftysailors.net. To see a video of the Nelson family performing their ode to an orca, visit www.deriknelson.com. For a sensory experience, pay a real (versus virtual) visit to the Langley Whale Center at 117 Anthes, from 11 a.m. to 5 p.m, Thursdays through Sundays.