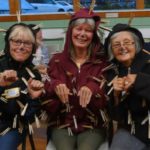 When the Friends of Clinton Library decided to hold a fundraiser, they settled on the idea of a spellathon–and then set about finding folks who would be willing to form teams, don costumes, invent names for themselves, and then spend Saturday evening, Oct. 1, testing their knowledge of words.

According to Clinton Library manager Debby Colfer, the Friends consulted with staff of the Everett Public Library, who had learned lessons from their own spelling bees. “The costumes were our own addition,” said Colfer. “Because we were holding it in October, it seemed right.” The Friends decided to offer prizes for best spellers and best team names and costumes.

Jane Jeszeck, Georgia Gerber and Sara Benum made up the Hedgehog WannaBees. (photo by Marcia Wiley)

Thirty-six adults entered the competition, dressed in costumes from minimalist (The Queen’s English) to maximalist (gray hippos, representing hippopotomonstrosesquipedaliophobia: the fear of long words). Each team–consisting of three individuals–was part of a swarm of four teams. The competition within a swarm produced one winning team, who went on to compete against the winners from the other two swarms. Each team had 30 seconds to write the given word on a white board, which–at the ringing of a bell–was held up to the audience and the judges. Those 30 seconds passed remarkably quickly for both the teams as they arrived at their decision about a word and also for spectators, who were entertained by the music and musings of Clinton resident (and Rural Character) Randy Hudson and Joe Jeszeck, one of the members of Hudson’s band, Heggeness Valley Boys.

Each team had 30 seconds to confer and write their chosen spelling of a word. (photo by Marcia Wiley)

In addition to the monies raised by the teams’ entry fees, several local businesses acted as sponsors. During the event, which was free to the public, a silent auction was also held. According to Colfer, the spellathon generated over $2,000. She and Friends’ president Arlene Stebbins were pleased by the community response; the funds will help pay for library programs in 2017.

“And we were happy to be able to rent the Clinton Community Hall and support the Clinton Progressive Association,” Colfer said. The hall, a gathering place for the Clinton community, was built by the 100 year old Association in the 1960s.

The Spellathon title for the evening went to the Brainiacs, who sweated and spelled their way to victory against The Queen’s English. The winning word was onychophagia: the practice of biting one’s nails.

And a nail-biting finish it was.

This was Dianna MacLeod’s first spelling bee. Despite her hippopotomonstrosesquipedaliophobia, she looks forward to the next one.