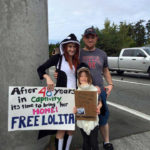 Over Labor Day weekend, a contingent of 50 or so “orcadorks” gathered at the intersection of Highway 525 and Coupeville’s Main Street, many sporting their signature colors (black and white) and some wearing costumes (variations on fins, tails, and snouts).

The “Free Tokitae” Rally in Coupeville on Sept. 3

What’s an orcadork? According to Susan Berta of the Orca Network, an orcadork is a person who knows a great deal about orca whales and, more importantly, cares a great deal. One orca in particular supplied the reason for Saturday’s gathering: Tokitae (also known as Lolita), the orca who was captured in Penn Cove 46 years ago and has been held ever since at Miami Seaquarium in Florida.

Lily Haight and her dog

The demonstration in Coupeville was part of a national protest of the conditions of Tokitae’s captivity and a demand for her return to the Pacific Northwest. The legal struggle to win her freedom has been agonizingly slow, marked by both progress and setbacks. The courts can’t seem to decide which anti-cruelty laws apply to Tokitae, and her captors at Miami Seaquarium see only as far as their bottom line. The clock is ticking for Tokitae; although orcas can live a long time in the wild, they are susceptible to various illnesses—including depression—when kept in a shallow, concrete tank. In fact, Tokitae is the last orca alive of the seven young whales captured in August of 1970 in Penn Cove. She has outlived her brothers and sisters by 29 years. Amazingly, Tokitae’s grandmother, the matriarch of her family group–known as the Southern Resident pod–still swims in our waters. Bonds are strong and memories long among orcas, and orcadorks hope that one day Tokitae and her grandmother will once again converse in the vocabulary of their species.

During the Labor Day demonstration, Orcadorks were clumping on all four corners of the intersection and lining the pedestrian walkway above the highway. They waved placards and home-made signs at passing motorists, who responded by honking horns, waving, and jabbing thumbs into the air. Curious about their reasons for spending part of their holiday weekend in this way, I asked several orcadorks why they cared so much about the fate of one whale, taken so long ago and held captive so far away.

Veyariva, age 10: “It’s not fair that the babies were captured and kept in a small tank. It’s cruel. I’ve cared about Tokitae ever since I was little.”

Jayden, age 9: “I saw her in Florida. It made me sad. They trained her, but it took a lot of practice. In a shed I saw some of the tools used for training her, spears and hooks. Now she’s scared to not do the tricks because she’ll get stabbed. Also, orcas need to dive deep down in the water, and she can’t. And there’s no shade over her tank, and in Florida it’s hot.”

Noelle, age 12: “I think she should be freed. How they captured babies is not fair. It’s not fair to take them young and use them for our entertainment.”

Alexa, age 14: “When I was in fifth grade, I became interested in whales. I wanted to be a marine biologist and joined a program in Gig Harbor called Harbor Wild Watch. When you go to any kind of wildlife park and see animals in cages, you can see the pain in their faces. Humans can fight for what we want; animals can’t do that. More and more people are joining the movement. I’m hopeful that in the next few years Tokitae will be moved to a sea pen.”

Rachel, age 27: “I grew up in Nebraska and went to the zoo all the time as a kid, never thinking about what the animals experience. When I saw the movie “Free Willy,” I started to care about their captivity. I visited Whidbey when I was 13; that’s when I learned about the captures. I loved the whales so much that I moved out here in 2011. When I volunteered at a wildlife rehabilitation center, I understood how much wild animals hate cages. A week after I learned about the Orca Network, I went out on my first wild whale sighting. What draws me to orcas is that they are family oriented. They are social and emotional. We can’t even begin to understand their intelligence. Who are the people who are paying money to see Tokitae in a tank?”

Minda, age 33: “I began to care about marine animals in the sixth grade. I wanted to be a marine biologist. When I was 18, I worked at SeaWorld, in merchandising. I went whale watching in 2014, and it all clicked: this is where Tokitae should be. I’m a member of the Whatcom Marine Stranding Network. We educate people on shore about what they should do if they encounter a marine animal on the shore. We also collect decayed animals to determine their cause of death. If people could see how related Orcas are to us… Tokitae, even after all these years separated from her family, responds to recordings of their calls. How could you not care about that? I have hope that she will be freed in my lifetime. I want to be there at the moment she’s released into her sea pen. I have this vision in my head of what it will be like.”

The logistics to realize that vision are already in place: the country’s best marine scientists have crafted a rehabilitation plan, a protected sea pen has been created, and a staff is assembled to help Tokitae transition back into the ocean. All that’s lacking is the consent of the marine park owners. And that, it seems, is where public pressure will make the difference between immediate freedom and continued captivity for Tokitae.

You don’t have to stuff your brain with facts about orcas to join our regional pod of Orcadorks; as I discovered, it’s the size of your heart that makes you one of the family.

All Photos Courtesy of the Orca Network.

Dianna MacLeod holds a degree in journalism and environmental advocacy. She is proud to be counted among our island’s orcadorks.