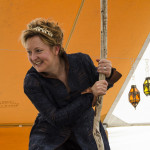 Prospero and the Playwright: Amy Wheeler Takes the Stage

As a young actress in New York City, Amy Wheeler found it challenging to find the kind of roles she wanted to play.

“The kinds of roles women were able to audition for were not fulfilling to me,” she said. “I looked like an ingénue but, inside, I wasn’t an ingénue. I felt roles were demeaning to women. It was a different time in the 80s and 90s and I kind of left acting.”

Her journey from actor to playwright and back again has come full circle this summer. Her play, “Wizzer Pizzer” is running in Seattle; meanwhile, she prepares to take the stage as Prospero in Island Shakespeare Festival’s production of “The Tempest,” opening this Friday, July 17.

Amy Wheeler as Prospero in The Tempest. (photo by Kim Tinuviel)

The daughter of a Methodist minister and an actress, Wheeler started performing at an early age, taking part in church Christmas pageants in various towns in Oklahoma. But it wasn’t until high school that she became truly passionate about the craft of acting.

Wheeler as Agnes in “Agnes of God,” University of Kansas (photo courtesy of the actor)

Studying theater at University of Kansas, Wheeler’s favorite roles were Agnes in “Agnes of God,” The Chorus in “Antigone” and Cordelia in a Kabuki version of “King Lear.” After graduating from college, she moved to New York and found a job in fundraising at the Paul Taylor Dance Company.

Frustrated by auditioning in the big city, Wheeler eventually signed up to take a playwriting class. Before attending her first class, she introduced herself as a playwright to the Artistic Director of the newly founded New Georges Theater Company. Her first play was produced within weeks and, within the year, she had been accepted into the prestigious MFA in Playwriting program at University of Iowa.

Wheeler moved to the Seattle area in 2000, teaching playwriting at Cornish College of the Arts. She joined the board of Hedgebrook and later took on the role of Executive Director, a position she still holds. In 2007, she moved to Whidbey Island and now lives in a 100-year-old dance hall renovated by her wife, Kate Buzard.

“I told her ‘You made me want to act again!’” Wheeler remembered. “‘But I want to play Richard; I want to play the male roles.’” Two months later, Woods approached her about playing Prospero in “The Tempest.”

Katrina Christiansen as Miranda, Amy Wheeler as Prospero and Valerie Huntington as Caliban in “The Tempest” (photo by Kim Tinuviel)

Woods raved about working with Wheeler. “Amy has this incredible inquisitive mind, coupled with her fiercely passionate heart,” she said. “Never content to settle for the easy or the obvious, Amy will continue to delve deeply into character work to find the most intricate details. She’s a true joy to work with.”

As she prepares to tread the boards once again, Wheeler reflected on her connection to Shakespeare’s final play.

“Working on ‘The Tempest,’ and it being supposedly the last play that Shakespeare ever wrote—his farewell to his life as a playwright—I’m so aware of him as I go through the play,” she said. “He had to let go of parts of himself, or reckon with parts of himself, and that’s really inspired me as a writer.”

Wheeler saw Mulholland in Theatre22’s production of “The Lisbon Traviata” last year. She introduced herself to Producing Artistic Director Corey McDaniel after the show and let him know she had written a comedy that might be a good match for their Pride Series. McDaniel read “Wizzer Pizzer” and found it to be a perfect fit for the company’s July slot, which is dedicated to magnifying LGBT voices.

“Amy is one of the most compatible collaborators I’ve ever worked with,” McDaniel raved. “We both share the same love of artists and the process and I feel as though we’re absolutely made of the same cloth. She is such a positive and radiant personality—so much so that everyone who meets her immediately feels drawn to her.”

“Amy writes smart plays and characters who are struggling with some of life’s big questions like identity, loss and love,” Mulholland said. “The character of Adrian confronts these issues head on in this kaleidoscopic tale of one man’s journey toward self-love. I feel blessed to know Amy and to work with her creatively. We seem to speak the same language artistically and it’s been a great partnership between playwright and actor.”

Whether acting on the stage or penning a new scene, Wheeler holds a firm belief that theater has the power to inspire and change lives.

“We have to have places as a culture where we can be in dialogue and wrestle with our demons and figure stuff out. And I really do believe that theater has the potential to change people in an evening, in one experience.”

Katie Woodzick works at Hedgebrook as an External Relations Manager. She is also an actor and director who can be seen on local stages and is the host of the Theatrical Mustang podcast: theatricalmustang.podbean.com. She is currently directing “The Pillowman” at OutCast Productions, running through Saturday, July 25.