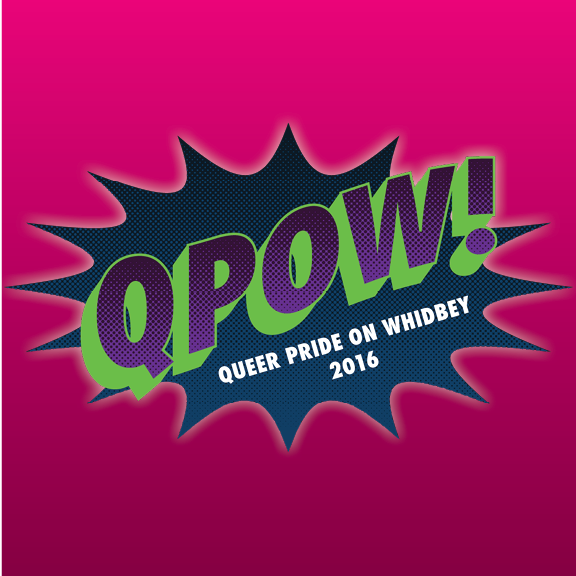 This Aug. 12 through 14 marks the third annual celebration of Queer Pride on Whidbey Island, also known as QPOW! What started out as a parade in 2014 has grown into an entire weekend of free, celebratory events hosted in Langley.

The 2016 festivities kick off with an all-ages open mic and poetry slam held at the Whidbey Children’s Theater Blackbox space at 7 p.m. on Friday, Aug. 12. This performance is youth-driven and youth-organized, hosted by Whidbey Youth Support and Empowerment (WYSE) and South Whidbey High School Equality Club.

The weekend continues on Saturday, Aug. 13 with the Queer Open Space Unconference from 11 a.m. to 2 p.m. at Langley United Methodist Church Fellowship Hall. Participants will experience an open format conference, where they can show up to talk about a specific topic or participate in organic conversations and stories.

Concerning the evolution of the conference component, QPOW! Co-Founder and Coordinator Kathryn Lynn Morgen said, “People want a venue to have conversations about the queer community and lifestyle. Instead of deciding what folks would want to hear or talk about, it makes more sense to open it up.”

New this year is the Saturday Night Soirée on Aug. 13, featuring drag, burlesque and cabaret performances for mature audiences. Morgen will curate this event, held at Whidbey Island Center for the Arts’ Main stage at 8 p.m. Audiences will enjoy performances by Ricki Sparxx, ChrisGina Touché and MC Patrovna, a drag queen from Coupeville and winner of the 2016 Skagit Valley College Rainbow Alliance Drag Show.

The signature event of the weekend is the Queer Pride Parade, which starts at 2 p.m. in downtown Langley. Over the past two years, hundreds of community members have marched in the parade, which has drawn almost a thousand attendees.

The weekend will wrap up with a volunteer appreciation potluck on Sunday after the parade, held at 4 p.m. at Langley United Methodist Church Fellowship Hall. This event is also open to the public.

Co-Organizer Ann Johnson emphasized the importance of QPOW! on both a personal and community level: “I support and take action through Queer Pride on Whidbey, because I love that gorgeous melty feeling of belonging to a part of something bigger than myself and my own experience with queerness. I get to share queer culture in all its glory with my growing, discovering, strong daughters, my patient and loving husband and found family members, new and old, in the community that I’ve adopted as my own.”

QPOW! is a crowd-funded and largely volunteer-driven community event. Donations are still being accepted at www.gofundme.com/qpowhidbey. The Whidbey chapter of PFLAG (Parents and Friends of Lesbians and Gays) is a proud sponsor of this year’s festivities.

Nominations are being accepted for the parade’s Royal Family and Grand Marshal, and can be submitted to queerprideonwhidbey@gmail.com.

Community member Kate Poss explained how QPOW! has touched and enriched her life and relationship with her son: “The ‘Queer Pride on Whidbey’ celebration was a highlight of 2015 for me. My son, who had told me of his orientation that year, brought his partner, and our gay friends, John and Johnnie, joined us as well. I felt that I ‘came out’ myself as a quirky character and a mother of a lovely gay son who was so happy to be himself after hiding for years. The world has opened up to him and his partner, now that they are out. I look forward to this year’s parade as well.”

For more information about registering for the parade, participating in and volunteering for QPOW! 2016, please visit: www.queerparade.com