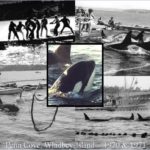 ‘Rally to Retire Lolita’ to be held in Coupeville on Sept. 3

Please join Orca Network for a “Rally to Retire Lolita” on Saturday, Sept. 3 in Coupeville. The purpose of this event is to draw public attention to Lolita’s plight and urge Palace Entertainment, who acquired the Miami Seaquarium nearly two years ago, to act in Lolita’s best interest and retire her to a coastal sanctuary/seapen. In addition to the rally in Coupeville, near Penn Cove where Lolita was captured in 1970, there will be simultaneous “Shut Down Palace” rallies at seven Palace-owned water parks across the United States.

In August 1970, over 100 Southern Resident orcas were herded into Penn Cove off Whidbey Island. Seven of the young whales were taken from their families and delivered to marine parks around the world. All but one had died by 1987. Lolita, originally named Tokitae, was sent to the Miami Seaquarium where she has spent the last 46 years living and performing daily in the smallest orca tank in North America, with no shade from the sun and no other orca companionship.

In Feb. of 2015, NOAA (National Oceanic and Atmospheric Administration) designated Lolita as “endangered,” as she is part of the endangered Southern Resident killer whale population of the Pacific Northwest. This status, along with her inhumane treatment at the Miami Seaquarium and alleged violation of the Animal Welfare Act, should allow her to come home.

There is a sound and safe rehabilitation plan for Lolita in place by the best marine scientists in the country. A protected sea pen waits for her, with a staff ready to monitor her 24/7 and help her transition back into the ocean so she can once again swim free, catch her own food, dive freely at will, and communicate with her pod that still inhabits the area. For this to happen, Palace Entertainment must accept the excellent retirement plan proposed by Orca Network or be court ordered to release her.

Read Lolita’s story and learn about her retirement plan at www.orcanetwork.org. For more information about the Shut Down Palace rallies, go to www.ShutDownPalace.net or contact Wendy King at ShutDownPalace@yahoo.com.

The Sept. 3 rally will take place from 11 a.m. to 1 p.m. at the intersections of Hwy. 20 and Main Street in Coupeville. Bring posters and banners; Orca Network will also have some available for use. For more information, please contact Cindy Hansen at (360) 223-5666 or cindy@orcanetwork.org.