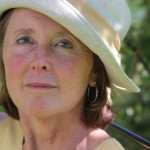 REFLECTIONS FROM THE HOOD: A Haunted Halloween at Whidbey Island Center for the Cursed Arts

On Friday night I had the pleasure of leading tours through the haunted house at Whidbey Island Center for the Cursed Arts (WICCA: old English for witch, wizard, sorcerer, soothsayer). For the frighteningly low price of five dollars, folks got a spine-tingling tour through a haunted forest.

I wore a cape supplied by the costume department. Knee-length, made of thick felted wool, the cape looked to be sewn somewhere in the forests of Bavaria, so seemingly authentic it could have been worn by Red herself. My face was shadowed by its deep hood; the weight of the cape hung heavy on my shoulders.

Buttoned into my cape, my curly silver hair covered by a long, dark wig, a lantern in my hand, at five o’clock on All Hallows Eve I was ready to venture into the WICCA woods.

The entrance to the forest—a gentle and dark incline, my lantern the only light—gave me time to whisper a hushed warning to my first group of tourists to stay together and keep moving. Ah, the power of suspense. Things that go bump in the night.

The things that bumped in WICCA’s haunted wood were fairy tales characters. In the spooky forest and maze-like passages of the theatre, we encountered iconic fairy-tale beings in extremis. Rumplestiltskin screamed at the miller’s daughter to spin straw into gold. Cinderella’s stepmother caned the cinder-covered girl as she scrubbed. Among tall, mossy trees lit by sporadic flashes of lightning to a soundtrack of cawing crows, muffled screams, crashing thunder and a giant beating heart, an evil queen ordered the woodsman to take a hatchet to the fleeing Snow White. Down a dark passage, a half-baked Hansel fell out of the witch’s oven in a cloud of smoke. Further along a wolf gobbled up granny as she dozed in her cozy fire-lit cottage. Fractured fairy tales, indeed.

Near the end of the tour we paused at the top of the ramp leading to the lobby—lit EXIT sign in sight. Ah, safety. It was here my tourists were set upon by the axe-wielding woodsman and ravenous wolf, who’d stepped out of their scenes to become the bogeymen they were all along. These apparitions sent the group running down the ramp and out into the lobby, where golden lights and cider and doughnuts awaited.

I realize that tour guides are not often called upon as authorities on human behavior. But after you’ve watched 75 or more people over five hours respond to exactly the same stimuli, you can’t help but make some observations.

We are all intrigued by the unknown; some hang back, others rush forward.

Certain children are either very brave, indifferent by nature, or top-notch blusterers. You-can’t-scare-me kids. Nothing could rattle ’em. Good thing? Bad thing? Who knows? I doubt anyone is tracking the correlation between fear shown in haunted houses and eventual life outcomes.

Kids under the age of eight or nine are willing to be entranced, those between 10 and 14 eager to show disdain, those 15 and over once again willing to suspend disbelief (or act as if they have). Is this a return to innocence? Nostalgia? Something else entirely?

Small children can be very brave—if their mothers go first.

Teenage girls find strength—and humor—in numbers. (They proceeded in lockstep with arms tightly linked, as if they were glued together, laughed nervously the whole way in and screamed the whole way out.) Teenage girls are great examples of the therapeutic effects of full-throated screaming—especially screaming while running, arms linked, with best buddies.

Some kids freely dispense advice. (One came to me with suggestions of how it could be a better haunted house: “More technical effects and not so many real people.” He put me in mind of a little entrepreneur finding ways to automate and outsource. Another kid cornered me after the tour to deliver a dissertation on what makes a haunted house haunted. “More people jumping out at you more often.” The fairy-tale vignettes were wasted on him. And I’m not sure he’s wrong: startled and scared are pretty close together.)

Women wearing wings are tougher than they look.

In dark unknown places, we don’t tiptoe. We shuffle.

Some children have a heightened capacity for empathy; they are more worried about the fate of fairy-tale characters than they are about their own safety.

Small groups of people following each other through a dark passage form lines, but not straight lines; they zig and zag. (Is this a survival thing? You don’t want to be first to confront danger and be sacrificed, you don’t want to be last and be picked off; the safest place is somewhere in the middle, but not squarely behind the person in front of you, because that person reduces your ability to see what’s coming and what’s going.)

People like clinging to each other—all for one and one for all—and we look for reasons to do it.

When a child says, “I might need to hold somebody’s hand,” they mean yours.

An effective antidote for fear is the immediate application of powdered-sugar doughnuts and apple cider. (Fear is a basic instinct, but so is food—most especially fat and sugar.)

I’m counting on the wizards and witches at WICCA hosting another haunted house next Halloween. In fact, I wish they’d do it more often—like, say, every full moon.

Think how much I’d learn about my fellow human beings.

Not to mention all those chances to wear that splendid cape.