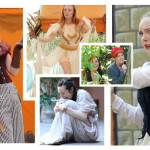 As our 2015 season winds to a close and many company members prepare to depart, it’s easy to feel a bit nostalgic.  For those of us who’ve been part of ISF’s growth over the past six seasons, it’s incredible to think of what’s changed in just a few years.  We know we are part of a uniquely beautiful beast, and we each have our reasons for coming back every summer to play Shakespeare with our tribe of merry madcaps.

My journey with Island Shakespeare Festival began in 2010, when I returned home to Whidbey Island after graduating from Circle in the Square Theater School in New York, NY.  I wasn’t sure of my next steps, and was excited at the prospect of auditioning for a production of “As You Like It,” to be played in the woods.  I knew I wanted to pursue a career in classic theater, particularly Shakespeare, and what a fantastic way to begin!  I was cast as Rosalind in our inaugural production, and have enjoyed some incredible opportunities to play some of Shakespeare’s most courageous and empowering women since.

What I love about this company is that we don’t forget where we came from.  While we’ve outgrown our original location, the beautiful Storyhouse stage on the Chinook land in Clinton, we continue to reminisce and pass the stories of those first years on to new company members.  I will never forget our cast circle before our opening performance of “As You Like It,” when Rose, completely unsure of what to expect (we were literally in the middle of the woods—the hike up to the stage from the parking lot was short but steep!) said to us “if we have as many people in the audience as we have on stage, we’re doing the show!”  We were all shocked when we couldn’t count the number in the audience.  We continue to be astounded by our growing audiences.  But we will always be a hands-on company of passionate artists who love sharing these timeless stories of the human condition with our community and beyond.  We more than love to do this—we are a company who feel a necessity continue the prehistoric tradition of storytelling.

I have chosen to return to ISF from as far away as MA because of the Artistic Integrity maintained by both the cast and crew, as well as the incredible community that Whidbey fosters within these casts. The natural beauty of Whidbey, the generous contributions of community members housing actors, Good Cheer Food Bank and volunteer staff are just some of the support that makes for a unique and touching bond amongst the cast. We in turn get to share that bond, via the stories told, with the community that supports us. I’ve been working since I was 13 years old and this is the best job I’ve ever had.

Why I keep coming back to ISF is not something I can adequately put into words. There’s the far-too-rare opportunity to perform Shakespeare; the talented and dedicated acting company; the raw, beautiful, utterly unpredictable nature of outdoor theater. And then, “herding all of the cats,” there’s our fearless leader Rose Woods, whose fierce passion and indefatigable nature inspires devotion. All of these elements combine into something ineffable that lives perpetually in my heart whether or not I’m actively in the company.

Through ISF I have found an incredible and meaningful family. The atmosphere and culture that Rose Woods cultivates as a director carries into our rehearsals, relationships, and ultimately makes for incredible and touching theater for all who witness it. I am so grateful for the deep inspiration and love I have received as a part of ISF. What an fantastic company to be a part of!

This is my second year at ISF. My first was 2012’s Midsummer Night’s Dream. Both summers at the festival have been pure magic, and if you knew how much of a stoic and skeptic I can be, you’d know I don’t use that term lightly. The people I’ve worked with at the festival, the work we’ve done and the island itself is like another world to me. I have said and can say again that this summer has been the best time of my life, hands down, and though I must wait two years to do so, I anticipate my return with a great deal of excitement.

Meeting a group of people, some old faces some new, who are all here for the same purpose, to work and strive to give art, FREE art; that’s why I return. Because here, for the past five years that I have been blessed to be a part of this company, we give it our all; all love, passion, energy, time. We all are here working together.

I was brought into Island Shakespeare Festival purely on faith two seasons ago and I believe that has been the greatest lesson I have learned from this company. The artists with whom I have worked have an incredible faith in each other and the work we do, and because of that, we have all grown in unexpected and beautiful ways. As I explore life and future artistic endeavors, I will always consider ISF my home base and my family.

I was so excited to come back to the island this summer. I had such a blast last season; we had an amazing cast and incredible shows and both were so well received by the community. There was no question in my mind that I would want to come back. The shows are so different this season, we’re in a new space and have lots of new faces. We have battled weather and heatstroke and bugs! But we have had so much fun doing it! The island is my home; it has given me so much. I love giving back what I can through free Shakespeare.

ISF’s first production was As You Like It (2010); things were a bit different then. We didn’t have Henry the tent, or even a place to call home. The company itself is Rose Woods’s brainchild; she simply possessed the passion, experience, and will to inspire others to give what they had to make some Shakespeare happen. The entire South Whidbey community was so gracious to us. The Hulls created a stage on their land, which required a lot of labor; Rose, the actors, ISF volunteers and Timothy Hull did much of this work themselves. Whidbey Children’s Theater lent us a lot of costume pieces, rehearsal and storage space; artists donated their time and resources for set decoration, props and costuming. It was a largely collaborative endeavor. We had no idea whether or not people would come see us. But they came in droves, which told us that—hurrah!—we probably could keep making shows each summer. Though we have changed locations, acquired a tent and a board of directors, and while the company grows by leaps and bounds and more and more audience comes to see us, the core passion that created the company remains unchanged. I am proud to have been part of each and every production since ISF’s inception. I can’t wait to see what happens next.

I come back because it is so addictively fun! The cast, crew, directors, environment—all too much fun. And getting to be on Whidbey all summer long? Wow.

I have been with ISF since before we were ISF. What we started in that forest was magical for all involved, to say the least. I return as often as I can because of the people in this company, and what we do here. We get to play with swords for crying out loud! I come back because I feel at home here. my children were born during rehearsal, I married my wife in our tent. There isn’t a word to express how honored I am to get to be a part of this. I truly believe in what we do, here, and the people I do it with.

Olena Hodges has shared her love of Shakespeare with the Island Shakespeare Festival and as a guest contributor to WLM this summer.