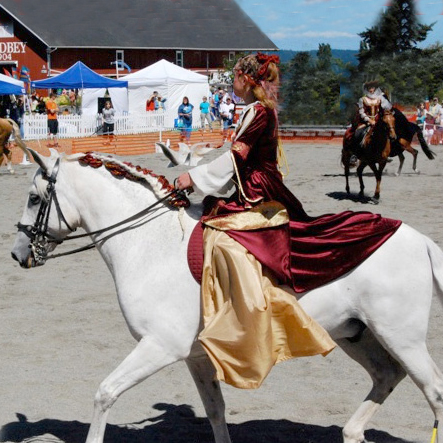 Don’t miss the exciting (and free) one-day festival—from 10 a.m. to 4 p.m. this Saturday, July 25—at Greenbank Farm, located right in the heart of Whidbey Island.

The event is FREE but you might encounter actors and actresses in full Renaissance costume, acting as “Renaissance bankers,” and asking—in a fun way—for a donation to help raise funds that assist in the support of Greenbank Farm. In return you’ll receive “coins of the realm;” the more you donate, the larger the “coin”!

What Pleasures Await You
at the Renaissance Fair?

Connie Lloyd on her horse Royal (photo by Kate Sharkey)

Watch horses and riders in Renaissance costumes move through their paces in the Renaissance arena. See a new horse act—“The Art of the Garrocha Pole”—likely never before seen on Whidbey.

Horsemen have used poles on horseback for centuries— jousting in competition with lances and spears. In Spain they’ve used the Garrocha Pole for just as long, but they were moving their cattle. Now this has now been developed into a ballet on horseback. (Check out this Spanish team in action at: www.youtube.com/watch?v=AIyjEyPDE8I.)

Learn history of falconry from Steve Layman while he handles his falcons. Watch them fly free in an indoor and outdoor falconry demonstration. “Training a hawk for falconry is an incredible process and awe-inspiring to even the experienced,” Layman has said.

Dog activities will include “Dog Carting,” to represent the Renaissance period when dogs were used to get products to market. Representing the “Now,” there will be a “Nose Work” demo, followed by a sheep-herding demonstration—showing the history of working sheep dogs.

Kids and adults alike will enjoy trying to throw the Atlatl—an ancient weapon that predated the bow and arrow— (a stick with a handle on one end and a hook or socket that engages a light spear or ‘dart’ on the other. The flipping motion of the atlatl propels a light spear much faster and farther than it could be thrown by hand alone.)

Parents—worry not! The Atlatl used during Renaissance Then, Renaissance Now is kid-friendly and lots of fun!

Learn about the “Slow Food” movement and The Organic Farm School at the Farm, including demonstrations of some very interesting foods being developed on Whidbey Island.

The “Parade of Ladies” (photo by Debi Telew)

Listen to live music and watch entertaining acts. Watch a history class on beer-making, demos on ancient bread-making and learn how fabric was originally created.

Why Hold a Renaissance Fair?

The Fair was begun a number of years back, when the Lloyds suggested it as  a small replacement event for the Loganberry Festival, Connie Lloyd said. “With a few friends, we thought we’d just do some small horse and dog demos without a lot of advertising or fanfare. We called it the ‘Dog and Pony show.’

After several years, [it] started to grow, and we were having so much fun we were looking for a way to make it even bigger. The first year we performed on horseback in long velvet dresses, and ribbons braided in our horses manes, and we were hooked.”

Riding instructor, Carol McArdle has an extensive background in classical training, and also loves performing in costume. So the group came up with the idea of a Renaissance Faire with a little different flavor.

“We wanted it to capture the  essence of a typical Renaissance Faire, but have it be more educational,” Lloyd added. “It started with a little ‘rag tag’ committee trying to see how we could pull together some local talent, not be larger than we could handle, and still make it fun.

“There has been even more uncertainty about the Farm, recently,” she continued, mentioning the concerns with the Port, “but we decided to go ahead with the event. It will either be our ‘last hurrah,’ in which we hope to go out with great flair, or a precedent of what is to come.

Along the way, the group teamed up with the Society for Creative Anachronism, an international organization dedicated to researching and re-creating the arts and skills of pre-17th-century Europe, which helped them expand their ideas even further. “We think we will be successful with our goals of a small, fun event, with local talent,” Lloyd said.

11:00 a.m.      Sheep Herding:
Herding dogs worked for us in the Renaissance and are still working for us
Susan Crocker

12:00 a.m.      Tir na nOg (The Land of Ever living) Troupe
Promenade of Equestrians to Arena for a Carousel Performance
Carol McArdle and five friends on horseback

THE RED BARN — BARN A

2:00 p.m.        Food and Farming:
Preserving the Past and Building the Future.
Learn about Slow Food and the connection with Organic Farm School on the Greenbank Farm.

THE PERFORMERS STAGE in the VILLAGE

Katy Shaner, compiler of the weekly “What’s Happening” calendar in the online Whidbey Life Magazine, is the manager and volunteer coordinator of the Visitor Information Kiosk.