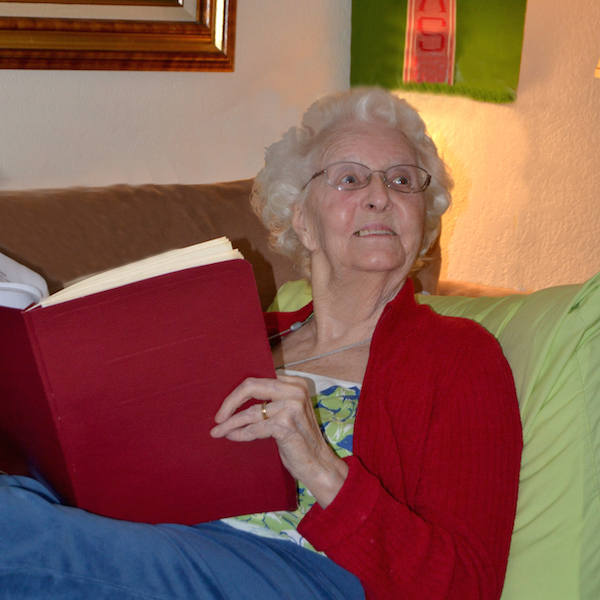 During the past holiday season my mind was in a whirl. Thoughts chattered nonstop about entertaining family and guests, buying gifts and shopping for food. I needed a “Rest Easy” session by the Whidbey Island Threshold Singers.

On a Tuesday night before the Winter solstice, my husband and I drove to the Healing Circles building in Langley. After removing our shoes, we padded upstairs to a long room where five women sat in a circle of chairs while a dozen others sat or lay about on the carpet. On hearing the soothing harmony of a cappella voices, my exhausted mind unwound in gratitude and I became aware of the sense of connection and peace that was created, during these dark days, by the tender singing that surrounded us.

The first Threshold Choir was formed 16 years ago by Kate Munger in California. The seeds for “threshold singing” began a decade earlier, she said, when she sang at the bedside of a beloved friend who was dying. “I did what I always did when I was afraid; I sang the song that gave me courage,” she noted. “I sang it for two and a half hours. It comforted me, which comforted him.”

Christa Straub is one the coordinators of the Whidbey Island Threshold Singers.

“There is something to lying down and having the music washing over you,” said Straub. “We sing in a gentle lullaby voice. It is most important to know that this is not a performance; we’re offering the comfort of voice.” Currently there are 12 singers who sing in groups of one to three at the bedside of the very ill, the bed-ridden, those who are dying or near-death.

Being asked to sing “is an utter honor,” said Straub, “at such a vulnerable, tender time in a person’s life. We understand the trust that’s been given us. We’ve been asked to sing for people who are dying and then are later invited to the memorial. That feels like a beautiful completion of a relationship.”

Straub discovered the Threshold Choir through a friend in California. “She sang with the Threshold Choir and shared a CD with me,” recalled Straub. “I loved the songs and was touched by them. Little did I know that later I would be singing with her as she was dying from cancer. Those evenings singing by her bedside are precious in my memory.”

Suni MacLean is the North Island contact for the Whidbey Island Threshold Singers. She joined the singers several years ago, after seeing an ad for the group on Drewslist. “I thought I’d like to go and try and it out,” MacLean said. I had been a nurse and been involved in Hospice before and found a great interest in singing. It is definitely a heartfelt thing to do. It benefits both sides: those of us who sing and those who get the benefit of singing.”

New members continue to join the group. Twice monthly afternoon practices are often hosted by Effie Brown in her home in Freeland. Evening practices are in Coupeville and Freeland.

During one practice, Straub and singer Anne Zontine turned to me and sang: “You are Loved,” also written by Marilyn Scott.

Drink it in, drink it in.
Love is the life-giving water.
Take it in, take it in.
Know it in every cell.
Soak it into your toes, so the rose that you are fully blossoms.
You’ve been loved, greatly loved. You are loved…”

It is remarkable to receive the kindness and warmth that is sung in these words. It creates a feeling of warmth in the heart.

Christa Straub (left) and Effie Brown, captured in mid-song, are long-time members of the Threshold Singers.  (photo by Raymond Poss)

Gaea Van Breda has sung with the Whidbey Island Threshold Singers almost from the start. She often provides the deeper-voiced harmony that provides depth to the songs. “I find it nourishing to sing and blend our voices,” said Van Breda. “It’s a huge gift, knowing we’re bringing comfort to the families. It’s all about service.”

On Christmas Eve, I joined the Whidbey Island Threshold Singers, who share their voices each Thursday for Dorothy Lepisto in Langley. At one point, Lepisto, who is 95, was in Hospice care and believed she wouldn’t live much longer. But she did live and found so much happiness from the singing that they continue to visit her each week. Lepisto sings along from printed words to the songs. On Christmas Eve, Straub, Van Breda and Effie Brown joined in singing Christmas carols and creating a sense of true good cheer.

If you or someone you know would like to receive the gift of the Threshold Singers’ song, they can be reached by calling Christa Straub at 360-331-7633 or Suni MacLean at (360-632-9071). If you are interested in joining their group, call Straub or MacLean also.

All lyrics included in this article are written and copyrighted by Marilyn Power Scott of the Threshold Choir. Visit http://thresholdchoir.org/ for more information.