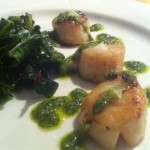 The wine pairings were superb and the dinner benefited Whidbey Animals’ Improvement Foundation (WAIF) in a winning evening for all. Guests were treated with a first course of sesame shrimp bruschetta on herb crostini which was paired with SDW 2013 Estate Rose of Pinot Noir. Salmon poached with Pomo di Moro (apple-pear wine) and apple slaw followed as the second course, with a pairing with SDW Pomo di Moro.

Quinn Fitzpatrick serenaded with his guitar throughout the dinner. The setting was beautiful overlooking Holmes Harbor, the weather was perfect and everyone left spoiled, full and happy. Woof, woof, woof.

For more information on Spoiled Dog Winery’s events, visit their website. Find out more about the Roaming Radish here.