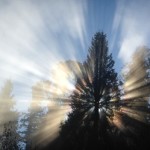 Rob Schouten Gallery at Greenbank Farm is ready to open a new, exciting show by Whidbey Island photographers Sharon Shoemaker and Kim Tinuviel on Friday, March 7. “Wide Angle” takes the viewer to the outer edges of photography where perception is informed by music, color, the absence of color and the creative exploration of landscape and form.

The show opens with “First Friday at the Farm” from 5 to 7 p.m. Friday, March 7; all the galleries and shops at the farm welcome patrons to enjoy some wine and cheese, and an exciting evening of art and conversation. Don’t miss “Wide Angle,” open through Monday, March 31.

These artists complement each other with work that is both similar and dissimilar. One works primarily in film and the other in digital, one in black-and-white, the other in color. One creates expressions of nature influenced by human greed, while the other creates impressions of inner voices. These distinctive qualities are intrinsically tied together by the panoramic or wide angle format.

Both photographers are experimental artists, creating work in diverse styles and with a wide variety of media. But it’s the photographs of “Wide Angle” that pare down all influences to these panoramic explorations, sometimes pushing the boundaries of photography and sometimes not. Shoemaker generally works in black-and-white film. Her panoramas are influenced by her first-hand witnessing of the effect of human presence on a beautiful landscape. “I love film, cameras and what I can do with them. They give me an art form and voice to be free to experiment, to think outside the box, then push it to the edge,” she said.

Most of Shoemaker’s “Wide Angle” pieces include a striking natural beauty that is interrupted by a man-made presence or condition, whether subtle or obvious. “I make panoramas of beautiful and interesting places,” Shoemaker said. “They are straight-forward, or not; always pushing the viewer to see the world uniquely.”

Tinuviel works primarily with digital technologies. Her panoramic landscapes include the traditional horizontal pans, as well as the more unusual verticals. Each piece is created with music in mind, due to the artist’s extensive experience as a professional classical musician and her gift of a cross-sensory perception known as synesthesia, which spills over into her visual art. Tinuviel actually hears certain notes in colors, while melodies and harmonies influence texture, line and form. “Creating this work is like being a singing vagabond,” Tinuviel said. “I wander all over the world looking for the images that play symphonies in my brain. When the music begins, I know the image is near.”

In the program notes for the show, fellow local photographer Skip Smith introduces the two photographers  as two artists who have their eyes wide open to beauty. “They stretch our vision to the periphery and encourage us to see beyond,” Smith writes. “Neither is afraid to experiment, which helps to bring a fresh look at the natural landscape.”