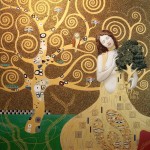 I read somewhere that the Austrian painter Gustav Klimt never used the same model twice. His only exception was his “Portrait of Adele Bloch-Bauer I” sometimes referred to as the “Lady in Gold.” He must have seen something special in her because he painted her again in “Adele Bloch-Bauer II.”

Rob Schouten’s homage to Klimt, “Dani and the Tree of Life,” was painted for an exhibition of paintings and sculptures that all paid homage to the Old Masters. The show happens every summer at Froggwell Gardens on Whidbey Island in August. Schouten said it was a confluence of circumstances that led him to choose Klimt as his source of inspiration. Klimt was one of the founders of the Viennese Secession school of art. Schouten is a magic-realist painter.

“The artist’s gold period portraits had long fascinated me and doing a portrait would be in line with my effort in recent years to become a better painter of people,” Schouten said. “The painting would be mostly based on Klimt’s first portrait of Adele Bloch-Bauer and would have the ‘Tree of Life’ as a subject featuring my friend Dani holding a tree.”

While researching Klimt’s work further, Schouten discovered the artist’s Art Nouveau designs for the dining room frieze of the Stoclet Palace near Brussels. It also included “Tree of Life” as its subject.
“While I found it impossible to completely extract my own style from the painting, the result looks very much like Klimt’s paintings,” Schouten said.
“I am particularly happy with the figure’s tender gesture and the patterning in both the dress and the tree, and the lively spirals of the branches.”

Schouten’s oil on canvas, “Dani and the Tree of Life,” is on display for sale at the Rob Schouten Gallery at Greenbank Farm.