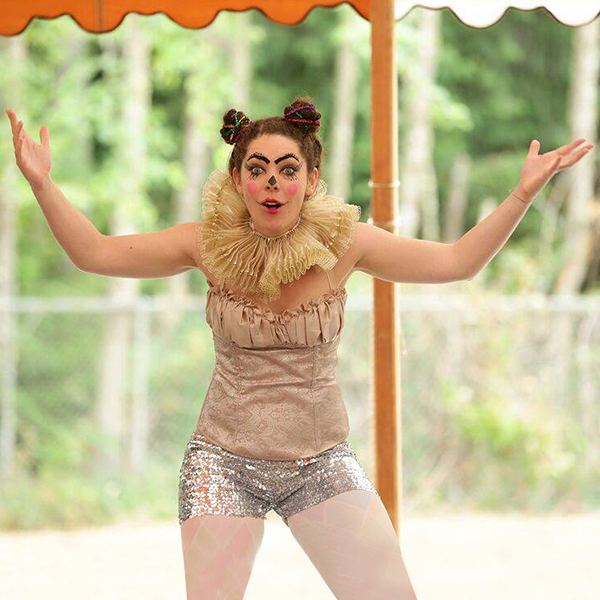 Life’s a shipwreck and we are all stranded men and women, left on the beach to discover who we are.

This is what I think of when I think of “The Tempest.” Power and insanity cloaked in mysticism, and the wielding of knowledge as a weapon.

We may find ourselves at the mercy of the keepers of The Books of Knowledge—the magic and the mystery that is, to those who command it—the everyday substance of their lives at the Microsofts, Amazons, Zymogenetics and their clones.

For aren’t they the kings and nobles of our age, the dukes and barons, the lords and ladies?

I ponder this in a tent behind a school on Maxwelton Road. The interior is draped with the beautiful artwork of Melissa Koch, depicting sailing ships and peacocks. Then I’m invited to dance to the beat of a different drummer as the most mystical and magical of Shakespeare’s plays begins. “The Tempest”!

The veils and ships and nets on the stage make me think of where we all live—our dens and living rooms, where we are all wrecked upon some stage or another. At home, in our automobiles, at the office—the whole world’s a stage and we are poor players strutting and fretting our stuff.

Then—shock and awe! The tempest arrives as elementals run the ship to ground with waves of silk and the wind of their voices. Now the impressive Amy Wheeler takes the stage and we meet Prospero, the magician, the exiled Duke of Milan! Ooooh, the drama!

But, no! Wait. Prospero and Miranda are the start of Rose Woods’ magical weaving of Shakespeare’s tale into something altogether wonderful and different.

Suddenly, the story is transformed into a mother and daughter in a modern kitchen, talking about what mothers and teenage daughters talk about (if the mother is a keeper of the mysteries of all things—and aren’t they all?). And what is more mysterious, after all, than the mother-daughter relationship?

Michael C. Robinson as an Elemental, Olena Hodges as Ariel, Amy Wheeler as Prospero, Laurel Livezey as an Elemental          (photo by Michael Stadler)

Meet Ariel (such a strong performance in the role from Olena Hodges) in angelic elemental form in her costume of white and gold: the trickster with feathers, who pronounces —as she always does—that hell is empty and all the devils are here. This line serves to underscore the difference in Woods’ vision from what you might expect from The Tempest. This is the vision I pondered before the play began—the exiled Duke against the evil power structure.

But this play is not that. No, this is not your father’s Tempest.

When I hear Caliban begin her speech: “This island’s mine, … The fresh springs, brine pits, barren place and fertile. …” it strikes me that The Tempest is, maybe, a play about Whidbey Island. Perhaps the ferry breaks down and shipwrecked tourists are stranded on the beach…King Alonso, Sebastian, et al, making their way into Langley to the Star Store for supplies. And who is Prospero in this new vision? I wonder.

Young love begins anew as SWHS students Miranda and Ferdinand fall for each other, and Prospero is the mother orchestrating the love affair of her daughter. Do this, don’t do that. Woods again highlights the secret power of women everywhere as magicians of life.

The stranded wedding party—Gonzalo, Antonio, Sebastian and King Alonso—are day trippers out of their element, finding a way to be on an island, strangers in a strange land, just like tourists on Whidbey.

I was thinking earlier about how I’d probably been spoiled for Trinculo for all time after seeing Russell Brand in Julie Taymor’s 2010 film version of the Tempest, but Ahna Dunn-Wilder’s portrayal, in silver metallic hot pants, has saved me! Like a hot one-night stand on the rebound, I’m in love with the jester anew.

Valerie Huntington’s Caliban surfaces in the action again like a strong swimmer in a relay team. But who is Prospero? I wonder again—the lady at Island Recycle, matching the inflow and outgo of trash and treasure by invoking the spirits of the dump? Anasazi Bhakti’s wonderfully drunken Stephano brings comic relief and drunken hilarity, as Stephano, Trinculo and Caliban close out Act One of a truly wonderful Tempest with a bang.

Woods’ Tempest is a story to which anyone with teenagers in the house can relate. Young love meets the matriarch with power over the hidden realms, a scene played out in every home on this island of ours at some time or another. Woods has turned one of the Bard’s most rarified and esoteric plays into one of life’s most universal stories.

The mother’s servant, Caliban, turns out to be just a feckless drunk who consorts with the fools stranded by a broken-down boat. A regular Thursday night at the top? The drunken horde of teenagers partying in the woods?

Stephano, Trinculo, Caliban and Ariel play out what, for me, is one of the funniest scenes in all of Shakespeare’s plays—the case of the misplaced identity caused by an invisible Ariel’s voice. The drunken kids are having fun on the beach after graduation; are we sure Will Shakespeare did not live on Whidbey when he wrote this play? Perhaps this is the Bard’s true genius—we can all see ourselves, those we know and where we live, all played out on the stage before us.

Elementals in the garden with the ornamentals. Antonio, Alonso, Sebastian and Gonzalo—at the feast offered by the elementals—brings to mind a scene of tourists near their car that’s run out of gas, by the roadside, picking blackberries as they wait for AAA. Are they safe to eat?

Hodges as Ariel brings a strength to the role that truly conjures the spirit of the earth that can wreck ships indeed and carry out the will of mad mothers everywhere, as now mother morphs to mother-in-law—watch out! Woods has shaped her actors into portraying a dichotomy not of power and vengeance, of privilege and outcast, but of women and men.

The women of her Tempest, embodied in Amy Wheeler‘s beautifully commanding, yet yielding, Prospero, are on the side of true love, the fairy elementals, the mystery of nature, the deep power of the feminine. On the other side are the men, befuddled and drunk, angry, plotting each other’s death—scheming manipulative weasels. Listen. “We are such stuff as dreams are made on” is one of the most famous lines in Shakespeare, dropped into the mix with aplomb at just the right time by Wheeler. Here we are, Woods says—this is us. What should we do?

The resolution of this question comes not in the vengeful power of mad Prospero, driven insane by exile. Instead we see the forgiving mother, the wise crone, AND the power of redemption. Director Rose Woods is a romantic, after all; she underpins this portrayal of the strength of the feminine with the motivation at the center of her telling of the Tempest: true love is always the fundamental cause of forgiveness and resolution. Now I see who Prospero is: she is the earth mother, the divine goddess, the eternal woman!

In the end the ferry is fixed; the tourists are of good cheer when they find they can go home. Sent on their way by “girl power” at its best.

Ian Bage is the author of “Desire,” a novel, and several books of poetry. His new play “The Sweet and Salty Salish Sea” will premiere as part of Whidbey Children’s Theater 2016 season.