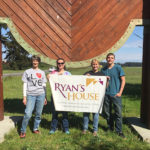 Imagine being a teenager without food or a place to sleep, or feeling like you don’t belong with your parents or family. Maybe it’s easier to live outside than to live with parents who may be abusive or are using drugs or alcohol. For whatever reason, you find yourself homeless.

For Lori Cavender, it’s a constant battle to help these young adults, but one she has embraced passionately for years. She’s a powerhouse representing the youth here on Whidbey, getting them food, a place to stay and whatever they need to survive, or giving them a chance to finish their education and an opportunity to simply be in charge of their own lives.

A parent of two teenagers herself, Cavender—the founder and Executive Director for Ryan’s House for Youth—started out as a youth minister for a Burien church 16 years ago. She was set on her life’s path when she and her husband took in a homeless teen. “That was the first experience that opened our eyes,” she said. Since then, her “daughter of the heart” has graduated from high school and is now working for the state.

Ryan’s House for Youth, with an office in Freeland, has always served the whole island. But recently, Cavender spearheaded a fundraising effort to purchase a permanent location. The community helped raised enough funds to open Ryan’s House for Youth in Coupeville and to secure more than 17 acres on the site of the former Country Inn. This former hotel will become their main headquarters, something they’ve needed for years.

“We’re thrilled about the space, thrilled about the layout and the support. But now that we’re in, people assume we don’t we don’t need them any longer. We need their support more than ever,” Cavender said. During an inspection earlier this year, they learned that the building would need a new roof. Additionally, the annual insurance policy more than doubled, unexpectedly, to $17,000 because of the distance from the fire department.

Although this newest addition will offer housing, Ryan’s House For Youth—as an organization—has worked with the island’s school districts for years, offering multiple services—an outreach van; provision of clothing, food and toiletries to the schools for homeless kids’ use; mediation with parents or grandparents who may be struggling to understand their teenagers; and a successful host family program since 2011. The new facility offers a drop-in center for kids and young people from ages 12 to 24 with expanded services from 7 a.m. until 7 p.m. Monday through Friday, hot meals, a place to shower and to wash clothes. Case managers provide support in getting medical care and counseling, obtaining IDs and employment services—all onsite.

In the fall, Ryan’s House plans to offer transitional housing for up to 30 youth, ages 18 to 24. The young residents will help support the program by contributing part of their income to defray some of the costs.

One of the many Model A Fords, owned by members of “Whidbey A’s”—the island-wide Model A Ford Club—that participated in this year’s “Round the Rock” benefit for Ryan’s House.  (photo courtesy of Ryan’s House for Youth)

Scott* is one of those planning to make the dorm-style room his transitional home. Verbally abused most of his life, he suffered from severe anxiety but has been staying with a kind, supportive family for several months. He recently started doing volunteer yard work around the new building, getting used to his new environment. At 19, he’s looking forward to finishing school and joining the Navy, which, he said, he feels stronger about now that he has a more supportive environment.

Although the facility is called Ryan’s House for Youth, these aren’t typical “kids,” Cavender said. For these young adults who need support, learning basic life skills has not come easily since their lives have been in such turmoil, sometimes for years. The staff at Ryan’s House offers support and opportunities so the young people can finish high school, go on to college and learn to live independently. Assistance in obtaining social services, for those eligible, or financial aid for college can make all the difference in their lives, Cavender said.

One young woman, Ashley*, was kicked out of her home when she was in sixth grade. Although she was allowed to return occasionally, the abuse continued until she finally left for good at age 16. Now 23, she’s studying psychology at Washington State University and planning on being a counselor. Through her own ongoing counseling, Ashley has learned to trust again and she feels she’s in a unique position to support those around her.

After she and her husband bought a house, they became long-term host families for three young adults and have been involved in the support of several others. “[My husband] knew, when he married me, that I would continue to be involved in Ryan’s House,” Ashley said. Several years ago, she joined the organization’s board and participated in “the big red couch” project, which brought more public awareness to the ongoing homelessness problem.

Staff and volunteers are proudly settling into their new home in Coupeville. (photo courtesy of Ryan’s House for Youth)

Although raising money is forefront for the board and volunteers right now, it isn’t the main goal, according to Cavender. Her biggest desire, and one that defines her dedication, is to keep the kids in school, to help them finish school despite difficult family situations and other obstacles. “We want to help them navigate through the rough times,” she said.

Currently, Ryan’s House is accepting any size monetary donations and they have an Amazon “Ryan’s House Wish List,” asking for staples, towels, yard tools and other household items. Check out their page at: http://www.amazon.com/gp/registry/wishlist/2PKZEYOHU87OP/ref=bnav_topnav_lists_1. For more information about Ryan’s House for Youth and their dedication to the community, see their Facebook page.

*The participants’ actual names have not been used in this article.