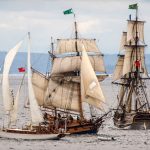 The small fleet entered Admiralty Inlet on its way into Puget Sound. Crisp sails grabbed the wind, propelling them south to their destination in Tacoma. The tall masts of the Lady Washington and Hawaiian Chieftain stood out, their majestic and massive sails pushing the ships onward.

As they sailed past the Admiralty Head Lighthouse on June 13, the tall ships were nearly passed by a shining, white-sailed schooner. From its port of Coupeville, the swift Suva cut through the waters with ease. “We had all we could do not to pass the tall ships,” says Captain Mark Saia.

The Suva, Hawaiin Chieftain, and Lady Washington passing by the Admiralty Head Lighthouse on June 13. (Photo by David Welton)

The flotilla from the past was bound for the Festival of Sail in Tacoma. The Suva joined a proud maritime heritage that included the Lady Washington, a 112-foot brig. A replica of a late 1700s ship of the same name, the Lady Washington was built in Aberdeen and launched in 1989 for the Washington state centennial. In addition to being used to teach Washington’s maritime history, the Lady Washington is a movie star. It was used in “Pirates of the Caribbean: The Curse of the Black Pearl” as the HMS Interceptor, as the brig Enterprise in “Star Trek Generations,” and appeared in a number of other movies, television shows, and even a Macklemore music video.

Beautiful as the passing ships were that June day, only two of them called Whidbey Island home: the Suva and the Cutty Sark. The Suva was built in 1925 for Coupeville resident Frank J. Pratt Jr. Designed by famous Seattle naval architect Ted Geary, it was built in Hong Kong using old-growth Burmese teak. It was docked in Coupeville for many years before being sold and moved to Seattle. Eventually, the Suva made its way to Port Townsend.

The Cutty Sark and the Lady Washington (Photo by David Welton)

The Cutty Sark, a 50 foot classic ketch, was built in Hong Kong in 1957 and was the first of ten sister ships of the Mayflower class designed by Hugh Angleman and Charlie Davies. Through the educational non-profit Aeolian Adventures, the Cutty Sark takes students on educational cruises in the San Juan Islands at no charge to them or their sponsoring organizations. Captained by John Colby Stone, the vessel calls Oak Harbor and Coupeville home.

Mark Saia had been offering charter boat rides for 10 years in Coupeville and found himself in a position to look for a new sailboat. “Three years ago, I found Suva in Port Townsend,” he says. It was love at first site, “I thought a classic boat would be fun to have in Coupeville.” Saia started researching the history of the boat and learned that Coupeville was its original port. He knew then that he had to bring it home.

Saia realized that it was a huge opportunity for historical preservation and education, so he founded the Coupeville Maritime Heritage Foundation to buy the Suva. In six months, he raised the money to purchase it.

Mark Saia, in the wheelhouse of the Suva, holding the original bell. (Photo courtesy of Coupeville Maritime Heritage Foundation)

Saia says that bringing the Suva home is about more than just giving rides in a beautiful sailboat. “Coupeville is a sea captain’s town. It was founded by sea captains,” he says. “They used to build boats in Coupeville.” Captain Saia hopes to bring more of the town’s maritime heritage back to life, “Coupeville should be just as strong in maritime as Port Townsend,” he says. He has made it his mission to bring Coupeville back to what it was.

Today, in addition to touring and sailing on the Suva, the best place to learn about Coupeville’s maritime beginnings is at the Island County Historical Society Museum. There, you can find a collection of artifacts related to the town’s maritime heritage.

Saia is hoping to add to that, however. He is currently working to acquire a sister ship of the Suva called the Red Jacket. His hopes extend to improvements in the harbor, including dredging out twenty feet of silt to return it to a previous safer depth, and the addition of a breakwater and large marina to attract tourists who travel by boat.

Visitors can tour the Suva or book a cruise. Some membership levels of the Coupeville Maritime Heritage Foundation include a ride on one of the Suva’s cruises around the area. Members also have the opportunity to be trained as part of the crew.

The Suva is moored at the Coupeville wharf, where you can climb aboard for a tour. You can take a walk through its carefully maintained cabins or take a leap and learn to be a sailor.

If you’re interested in a day you’ll always remember, up to six people can board the Cutty Sark for a 10-hour day sail for $600 plus tax, which includes the ship, captain, and fuel. All proceeds go to Aeolian Adventures, a 501(c)3 nonprofit organization.