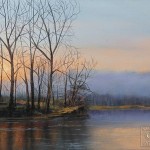 Sandy Byers: For the Love of Biscuit and Gravy

What struck me first about Sandy Byers’ website was the entire section devoted to “Cats Only.”

“Biscuit and Gravy were two loves of my life; they were my muses,” Byers said. Both of the cats went to “cat heaven” but while they were in her life, she did dozens of paintings of them, individually and together. Her pastel of the two, “Dibs on the Red Chair,” won first place in the Animal & Wildlife category of Pastel Journal’s “Pastel 100 Competition” and appeared in the April 2012 issue.

Byers said she came late to the world of professional artists, even though she had her first private lessons in oil painting when she was 13. She has been obsessed with art her whole life but she didn’t take her next oil lessons until she was 25. For the next several years she worked for Microsoft and then for Expedia in program management and program development. “The longer I worked in the software industry,” she said, “the more I became motivated to pursue art.”

In 2002 she moved to Oak Harbor, left the software business and began to concentrate on her art in a studio her husband built in their home. Today, Byers and her husband live next door to her parents; her family lived in Oak Harbor during one of her father’s Naval deployments and, after retirement, her parents settled there. Her sister, Diane (who has two cats) lives around the corner and her brother lives in Cornet Bay.

Because art was a second career for Byers, she needed to build her cachet in that world. A few years after opening her studio, she achieved signature status at national, regional and local levels. Her website indicates awards and presentations that began in 2004 with two awards in Pastel Journal and extend to the cover art for the American Veterinary Medical Association magazine in November 2013.

She has also greatly expanded the media with which she works her wonders. “Art is my constant companion wherever I go and I like to experiment with many different materials,” she said. Her primary media are now oils and pastels. But she is constantly setting new goals for herself: new processes or subjects, where to focus her attention and how much to paint.

She has a love of all animals, she said, and that is expressed in much of her art. She tells the story of having a chicken follow her around and realizing, upon returning home, that she had fallen in love with it; the chicken soon became the subject of a painting. Animals represent about a third of her paintings. However, when her cats died, she began focusing more on outdoor painting. Her website shows five areas of specialization; in addition to “Cats Only” and “Animals” she features “Figures,” “Land and Sea” and “Still Life Floral.”

Byers said she recently discovered the world of plein air painting. “I’ll be outside a lot in the coming months, on Whidbey and beyond, looking for whatever calls to me.” She especially appreciates how much she gets to interact with people when she is doing her plein air work. “People are drawn to what I’m doing and enjoy talking with me while I’m working. All the sights and sounds that occur around the painting become a memory of what I’ve done,” she added. One of her favorite stories is her experience painting an interesting barn and noticing a teenage boy who came running up to see what she was doing. When he saw her painting, he exclaimed excitedly, “That’s my barn!”

Sandy Byers appreciates seeing others enjoy art. She teaches workshops out of her home studio and is supportive of anyone who seeks her out, responding to questions or giving advice about an art project.

To keep up with Byers, visit her website: www.sandybyers.com. And check out her work in this month’s Virtual Gallery.

Photo at top: “Edge of Skagit” pastel by Sandy Byers (photo courtesy of the artist)