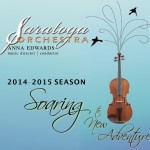 Whidbey’s Saratoga Orchestra recently hosted a summer soireé at One Spirit Garden in Clinton to welcome new music director and conductor, Anna Edwards, and to announce the upcoming season, “Soaring to New Adventures.”

Edwards was officially appointed this past May after a two-year search in which the musicians, Board of Directors and community participated in the selection process. She has been part of the vibrant Seattle music community for the past twenty years as a violinist, educator and conductor and looks forward to becoming an integral part of the island’s arts community.

“Curtains Up!” at 2:30 p.m. on Sunday, November 2 at South Whidbey High School. It will feature Rossini’s Overture to “Barber of Seville,” Mendelssohn’s Piano Concerto #1, Op. 25 with celebrated pianist Mark Salman as soloist and Beethoven’s Symphony #7, Op.92.

“Appalachian Spring for a Whidbey Winter” chamber music concert will be offered at WICA at 7:30 p.m. on Saturday, January 17 and repeated at the Nordic Hall in Coupeville at 2:30 p.m. on Sunday, January 18. Highlights of the concert include Aaron Copland’s “Appalachian Spring” for thirteen instruments and a new work commissioned from film/television composer Tim Huling featuring Saratoga musicians Jennifer Nelson, clarinet, and John Carrington, harp. Huling’s compositions range from PBS’ Inside Passage to the 2008 Beijing Olympics.

“Fairy Tales and Ancient Legends” will be an epic undertaking with the presentation of Carl Orff’s masterpiece, “Carmina Burana.” Featuring a massed choir comprised of Whidbey community members and students, these concerts will be held at 7 p.m. on Saturday, March 21 at Oak Harbor High School and at 2:30 p.m. on Sunday, March 22 at South Whidbey High School. Soloists include baritone Karl Olsen of Greenbank, soprano Lisa Berritella of Oak Harbor and countertenor Voltaire Verzosa.

Saratoga Orchestra’s “Intermezzo VI Gala Concert” will be held at 7 p.m. on Saturday, May 9  at South Whidbey High School. We are honored to have, as guest artist, the progressive jazz/bluegrass fiddler, Darol Anger. An original member of The David Grisman Quintet and Turtle Island String Quartet, Mr. Anger is at home in a number of musical genres, some of which he helped invent.

The Saratoga Orchestra is currently selling advertisements for placement in the season program book. This year we are inviting our patrons to purchase an ad that welcomes Anna Edwards to Whidbey Island. If you are interested in supporting Anna and the Saratoga Orchestra by purchasing an ad, please contact Larry Heidel, Executive Director, at www.sowhidbey.com or call 360-929-3045.