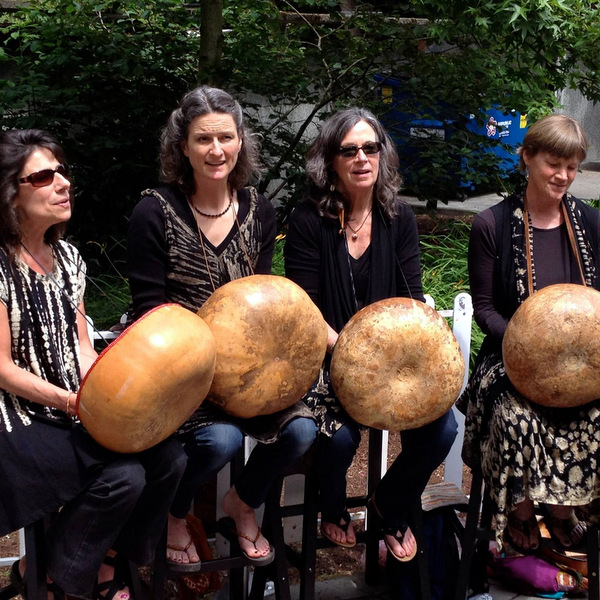 Sarungano – Lighting up the Season With Mbira Music From Zimbabwe

Listening to the songs of “Sarungano,” a CD made by local Whidbey Island women singing and playing traditional Zimbabwean mbira (pronounced em-ˈbir-ə) music, generates a refreshing sense of well-being and calm.

Sarungano means storyteller in the Shona language, which is widely spoken throughout the southern African country of more than 14 million people. The group’s members are Dana Moffett, Dyanne Harshman, Leslie Breeden, and Donita Crosby, who perform at Zimfests, Northwest Folklife, WICA (Whidbey Island Center for the Arts), the Bayview Farmer’s Market, Blooms Tasting Room, and at Ott and Murphy in Langley. In the video below, you can hear them performing at WOW (Women on Whidbey) in 2013.

Mbira (both the music and the instrument) holds a deep appeal for these talented Whidbey Island singers and musicians. They feel called to play, sing, and let the music flow through them out to the world in harmonic synergy. Audiences and listeners feel the love of the Zimbabwean people, who have shared their sincere friendship and deeply spiritual culture with Sarungano.

“One of my friends has a saying, ‘We meet to part; we part to meet’ and that is what keeps the connection going until we’re together again,” says Moffett, who formed Sarungano in 2011. Founder of the Rubatano Center, Moffett is also the inspiration behind Whidbey Island marimba bands past and present.

Traditional mbira music is considered a sacred link to the spirit world by the people of Zimbabwe and Mozambique.  It vibrates in the heart and is thought to create a sense of peaceful mind and strong life force. Moffett first heard the music in Seattle in 1995 and was so taken with its uplifting energy that she shared it with Whidbey Islanders and found a way to give back to the people who had influenced her.

“I was blown away with their music and wanted a way to play it,” Moffett said. “The instruments led to starting a group here, classes, and performances.”

Moffett has traveled to Zimbabwe nine times over the years, and each time she goes, her bonds with its people increase. Some of the proceeds from CD sales and marimba classes go toward the purchase of traditional instruments and teaching the music to students.

On their last visit to Zimbabwe, in spring of 2015, members of Sarungano sang for a friends’ wedding and worked with Jacob Mafuleni, an inspired mbira teacher and friend, to start a music program for “Child Future Africa,” an orphanage in the Mt. Darwin area, northeast of the capital city Harare. The instruments were funded in part by Rubatano Marimba musicians and the marimba community.

Although mbira was traditionally performed by men, Jacob’s wife Martha Thom helped forge a new culture by starting a women’s mbira band. Like her friend Martha Thom, Moffett created an all-women mbira group on Whidbey Island. The women continue to be energized in their performance through their connection with Zimbabwean teachers in the greater Seattle area. Moffett plans to visit Zimbabwe again in June 2017 to gather more inspiration and bring it back to Whidbey.

Their CD is a light during our winter season and can be purchased by emailing sarungano@whidbey.com.

Kate Poss worked as a library assistant at the Langley Library until last June. She was thrilled to work for three summers as a chef aboard a small Alaskan tour boat from 2008 to 2010. She was a newspaper reporter in Los Angeles for many years before moving to Whidbey Island, where she likes “talking story,’”hiking, hosting salons and writing her novel.